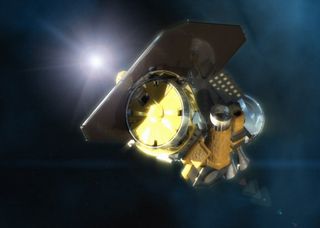 The space agency declared Deep Impact dead today (Sept. 20), six weeks after the last communication from the probe, which slammed an impactor into one comet and successfully flew by another icy wanderer during its long and productive life.

"Deep Impact has been a fantastic, long-lasting spacecraft that has produced far more data than we had planned," Deep Impact principal investigator Mike A'Hearn, of the University of Maryland, said in a statement. "It has revolutionized our understanding of comets and their activity." [Best Close Encounters of the Comet Kind]

Deep Impact launched in January 2005 on a mission to rendezvous with Comet Tempel 1. In July of that year, the spacecraft crashed an impactor into Tempel 1, allowing scientists to study the icy body's composition.

Deep Impact then flew by Comet Hartley 2 in November 2010, as part of a broad extended mission dubbed EPOXI (a combination of "Extrasolar Planet Observation and Characterization" and "Deep Impact Extended Investigation").

The spacecraft also observed Comet Garradd from afar from February-April 2012, then snapped its first photos of the potentially dazzling Comet ISON in January of this year. In addition, Deep Impact captured images of Earth, Mars and the moon and studied six separate stars to confirm the motions of their orbiting planets, NASA officials said.

Over the course of its operational life, the spacecraft beamed home about 500,000 images and traveled 4.7 billion miles (7.58 billion kilometers) through deep space.

"Six months after launch, this spacecraft had already completed its planned mission to study Comet Tempel 1," said Deep Impact project manager Tim Larson, of NASA's Jet Propulsion Laboratory in Pasadena, Calif. "But the science team kept finding interesting things to do, and through the ingenuity of our mission team and navigators and support of NASA’s Discovery Program, this spacecraft kept it up for more than eight years, producing amazing results all along the way."

Mission controllers last heard from Deep Impact on Aug. 8 of this year, and repeated attempts to reactivate its onboard systems were unsuccessful. The exact cause of the problem remains unknown, but the probe's handlers suspect that an issue with computer time-tagging caused Deep Impact to lose control of its orientation in space.

As a result, the probe likely had trouble positioning its radio antennas and solar arrays, making both communication and power generation difficult. Without sufficient power, Deep Impact's battery and propulsion systems may have frozen up in the frigid depths of space, NASA officials said.

"Despite this unexpected final curtain call, Deep Impact already achieved much more than ever was envisioned," said Lindley Johnson, the Discovery Program Executive at NASA Headquarters, and the longtime program executive for the spacecraft's mission. "Deep Impact has completely overturned what we thought we knew about comets and also provided a treasure trove of additional planetary science that will be the source data of research for years to come."