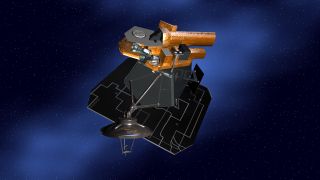 NASA's well-traveled Deep Impact spacecraft, which slammed a probe into one comet and then flew by another, may be drifting out of control in deep space and starving for power.

In a mission update Tuesday (Sept. 10), NASA officials said they lost contact with the Deep Impact probe on Aug. 8 and efforts to restore communications with the spacecraft have unsuccessful, prompting worries that the spacecraft may not be able to point its antennas at Earth to phone home.

NASA scientists suspect Deep Impact's main computers may be constantly rebooting due to a software glitch. That, in turn, could put the spacecraft in a potentially dire situation, NASA officials said.

"If this is the case, the computers would not continue to command the vehicle's thrusters to fire and hold attitude. Lack of attitude hold makes attempts to reestablish communications more difficult because the orientation of the spacecraft's antennas is unknown," NASA officials wrote the Tuesday status report. "It also brings into question the vehicle's electrical power status, as the spacecraft derives its power from a solar array that is fixed, with its cells pointing in one direction."

The Deep Impact spacecraft is NASA's most traveled comet probe. Since its launch in 2005, the spacecraft has traveled across 4.7 billion miles (7.58 billion kilometers), NASA officials said.

NASA launched the Deep Impact spacecraft in January 2005 on a mission to visit Comet Tempel 1, a journey of 268 million miles (431 million kilometers) that ended on July 4 of that year when the spacecraft slammed an impactor probe into the comet as NASA and scientists around the world watched.

After its encounter with Comet Tempel 1, Deep Impact entered an extended mission called the Extrasolar Planet Observation and Characterization and Deep Impact Extended Investigation, or EPOXI.

During that extended phase, Deep Impact performed maneuvers in deep space that allowed it to make a close swing by another icy wanderer, Comet Hartley 2, on Nov. 4, 2010.

In 2012, Deep Impact performed a long-range observation campaign of the Comet C/2009 P1 (Garradd). This year, the veteran spacecraft was part of a multi-spacecraft imaging campaign of Comet ISON, a long-anticipated object that some scientists have billed as a potential "comet of the century" if it survives a close flyby of the sun on Nov. 28.

Deep Impact's first Comet ISON photos were captured between mid-January to March 8 of this year. Another opportunity to photograph the comet occurred between July and early September, though Deep Impact's current woes may have prevented it from sending any of those newer images back to Earth, mission scientists have said.