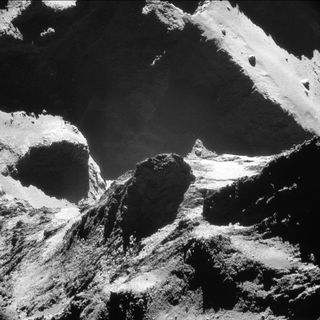 This single-frame Rosetta navigation camera image of Comet 67P/Churyumov-Gerasimenko was taken on October 19, 2014, at a distance of approximately 4.9 miles (7.9 km) from the comet's surface and released on May 28. The image looks across the neck from the comet’s small lobe in the foreground to the large lobe in the background. Parts of the Anuket and Serqet regions are visible in the foreground and a portion of Hapi is present at center left, with the dramatic cliff edge in Seth in the background.
(Image: © ESA/Rosetta/NavCam – CC BY-SA IGO 3.0)

A deluge of newly released photos from the Rosetta mission reveals the haunting alien landscape on the surface of a comet as it orbits the sun.

Over the last few weeks, the European Space Agency (ESA) has released over 1,700 new images of the Comet 67P/Churyumov-Gerasimenko, taken by the Rosetta spacecraft during its closest approach to the 2.5-mile-wide (4 kilometers) space rock. The photos emanate an eerie stillness on the rocky, lifeless surface.

The two-lobe shape of 67P/Churyumov-Gerasimenko has drawn comparisons to a rubber duck (with a round head and larger body joined together by a narrow section). One of the new images was taken from the smaller lobe, with the larger lobe rising up like a cliff face in the distance.

The images reveal a highly varied topological landscape on the surface of the comet. In one image, the cliffs of Hathor are visible. These cliffs stretch 2952 feet (900 meters) high.

Rosetta traveled to Comet 67P/Churyumov-Gerasimenko along with the Philae lander, which touched down on the comet's surface on Nov. 12, 2014. Philae bounced off the surface and came to rest in a shadowed region where its solar panels do not receive enough light to recharge the lander.

The swarm of newly released photos was taken around the time that Philae made its historic leap onto the comet's surface. This video shows Rosetta's orbital path around this time, including its release of Philae and its close approach to 67P/Churyumov-Gerasimenko.

There is more information about the photo release and about the entire mission at the Rosetta blog.