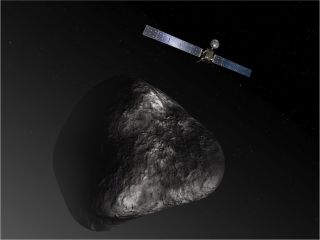 The Rosetta orbiter will plunge down into Comet 67P Friday (Sept. 30), snapping pictures and analyzing gas and dust on the way down.
(Image: © ESA/NASA)

The first spacecraft to orbit a comet will end its historic mission on Friday (Sept. 30) with a crash landing.

The European Space Agency's (ESA) Rosetta probe has circled Comet 67P/Churyumov-Gerasimenko for the last two years, collecting observations of the primitive chunk of dust and ice. This week, Rosetta will complete a final set of maneuvers to put the craft on a collision course with the comet.

ESA managers said they hope to land Rosetta near active pits on an area at the "head" of the duck-shaped comet. Those pits are dotted with lumpy structures known as "goose bumps," and they produce jets of gas and dust. Comets are among the most ancient bodies in the solar system, and studying their composition and structure could lead to a better understanding of how the sun and planets were formed. [Photos: Europe's Rosetta Comet Mission in Pictures]

Rosetta launched in March 2004, and after a decade-long journey through the solar system, the probe arrived at Comet 67P in August 2014. Then, in November 2014, Rosetta's onboard lander, Philae, was deployed to the comet's surface. But the landing didn't go so smoothly. Philae's anchoring harpoons failed to fire, and the washing-machine-size probe bounced into a shaded area of the comet. (It was only during a flyby of the comet earlier this month that Rosetta could finally capture images of the lander on its side in a crevice.)

With its batteries powered by solar panels, Philae was able to collect only 60 hours of data before going into hibernation, but even this short period of observation gave scientists some insight into the structure and evolution of comets.

Comet 67P orbits the sun once every 6.5 years, making its closest approach to the sun in August 2015. Since then, the comet (and Rosetta) have been traveling farther and farther away from the sun. The mission has to come to an end soon, as Rosetta's solar panels will no longer be able to power the spacecraft. The probe is not designed to survive the landing, or even to withstand gravity; at the moment of impact, Rosetta will be crushed and its signal will go dark, ESA managers said.