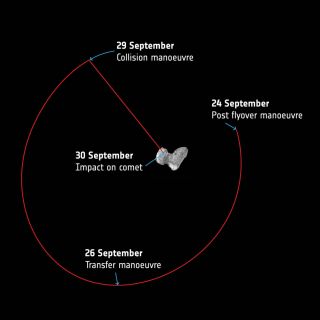 The last-ever maneuver of the Rosetta spacecraft on Sept. 30 will take it toward several active pits on the "head" of Comet 67P/Churyumov–Gerasimenko, European Space Agency officials said.

Rosetta's descent will take it to a spot next to a 425-foot-wide (130 meters) pit informally named Deir el-Medina, which refers to a structure that had a similar appearance in an ancient Egyptian town. Many of Comet 67P's jets originate in pits such as Deir el-Medina.

"The walls of the pits also exhibit intriguing meter-sized lumpy structures called 'goosebumps,' which scientists believe could be the signatures of early 'cometesimals' that assembled to create the comet in the early phases of solar system formation," ESA officials wrote in a statement. [See photos of the Rosetta mission]

The landing will cap off several weeks of challenging operations for Rosetta, which is actually not designed for landing at all. The probe has spent more than two years circling 67P, taking the comet's measure from a variety of distances and angles.

Rosetta's final flyover will happen Sept. 24. After that, ESA plans several maneuvers to put Rosetta on the right track for its comet landing, which will bring the historic mission to an end more than 12 years after it launched.

Rosetta will begin its freefall toward 67P on Sept. 29, collecting data as it goes. Its instruments will look at gas, dust and plasma (electrically charged gas) during the descent. ESA will decide on the instruments used once the agency knows the trajectory, and how much data is available to send back from the comet's distant perch in the solar system.

Rosetta is expected to strike the surface of 67P around 6:40 a.m. EDT (1040 GMT) on Sept. 30, although that could change depending on Rosetta's trajectory and how much the gravitational field changes as the probe gets closer to the comet. It will take about 40 minutes for the signal to reach Earth, meaning confirmation won't arrive until about 7:20 a.m. EDT (1120 GMT).

"Mirroring Rosetta's wake-up from deep space hibernation in January 2014, where a rising peak at the right frequency confirmed that the spacecraft was alive and transmitting its carrier signal, mission controllers will see that peak disappear for a final time once Rosetta impacts. It will not be possible to retrieve any data after this time," ESA officials wrote in the same statement.

The times and details of the descent will be refined as more information about the trajectory is available, but nothing will be finalized until the day of the landing. While the mission will end officially on that day, it will take some time to properly analyze everything Rosetta sent back to Earth, ESA officials said.

"It's hard to believe that Rosetta's incredible 12.5-year odyssey is almost over, and we're planning the final set of science operations, but we are certainly looking forward to focusing on analyzing the reams of data for many decades to come," Matt Taylor, ESA's Rosetta project scientist, said in the same statement.

The Sept. 30 touchdown will be the second landing on 67P for the Rosetta mission; in November 2014, the orbiter dropped a small lander called Philae onto the comet's surface. That landing didn't go as planned; Philae bounced twice and came to rest in an unknown location.

Last week, Rosetta team members announced that they had finally found Philae after 22 months of searching. In the coming weeks, Rosetta will image Philae's landing site from closer up, ESA officials have said.