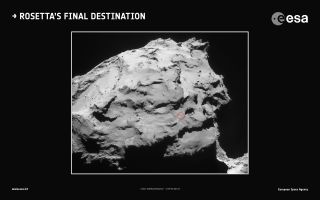 Image of Comet 67P/Churyumov-Gerasimenko showing where the Rosetta spacecraft should touch down on Sept. 30, 2016 (red circle).
(Image: © ESA/Rosetta/NavCam)

At around 6:40 a.m. EDT (1040 GMT) today (Sept. 30), Rosetta is scheduled to crash-land intentionally on Comet 67P/Churyumov-Gerasimenko, ending the spacecraft's epic 12-year mission. You can watch this grand finale live here on Space.com, courtesy of NASA TV.

Confirmation of the touchdown won't come until 7:20 a.m. EDT (1120 GMT) or so, because it takes 40 minutes for signals from Rosetta to reach mission control. (Rosetta and Comet 67P are currently about 447 million miles, or 719 million kilometers, away from Earth.) [Rosetta's Amazing Comet Mission in Pictures]

Rosetta and the comet are zooming out toward the orbit of Jupiter, getting ever farther from the sun. It will soon be difficult for the solar-powered probe to harvest enough sunlight to operate, which is part of the reason the European Space Agency (ESA) decided to end the mission today with a slow, controlled impact.

"Although Rosetta will be put down as gently as possible on the surface of the comet, it was not designed to land, and mission scientists will lose contact with the spacecraft at the moment of touchdown," Alan Fitzsimmons, a professor at Queens University's Astrophysics Research Centre in Belfast, Northern Ireland, said in a statement.

Rosetta "will continue to send information until the final seconds, but the work won't end then," added Fitzsimmons, who is not part of the core Rosetta team but has made observations in support of the mission. "We still have months and years of working through all the data to uncover everything we can," he said.

The 1.3 billion euro ($1.46 billion) Rosetta mission launched in March 2004, and then took a long and looping route to the 2.5-mile-wide (4 km) Comet 67P. Rosetta rendezvoused with the icy body in August 2014, becoming the first spacecraft ever to orbit a comet.

The mission notched another first in November 2014, when it deployed a washing-machine-size lander called Philae to the comet's surface. This touchdown didn't go as planned; Philae's anchoring harpoons failed to fire, and the lander bounced twice before finally setting down for good in a shady spot that prevented it from recharging its main batteries with solar power.

But Philae did operate for 60 hours on Comet 67P's surface, collecting a variety of data and snapping dramatic images of its surroundings.

Overall, the Rosetta mission has been a tremendous success, Fitzsimmons said.

"Rosetta and Philae have revolutionized our understanding of comets and their birthplace — the solar nebula from which the Earth formed 4.6 billion years ago," he said. "Throughout this mission, Rosetta has viewed with unprecedented detail the changing surface of the comet and the material it has released. Among the many findings was the discovery of hard ice on the surface, the first probing of a comet interior by radar and the detection of amino acids in a comet."