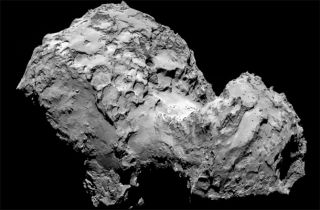 From a distance of 177 miles, or 285 km, Rosetta catches a view of comet 67P/Churyumov-Gerasimenko as it begins its mission in August 2014.
(Image: © ESA/Rosetta/MPS for Osiris Team MPS/UPD/LAM/IAA/SSO/INTA/UPM/DASP/IDA)

Gravity measurements taken by the orbiting Rosetta spacecraft show the body of comet 67 P/Churyumov-Gerasimenko is about 75 percent dust and 25 percent ice all the way through, research published Wednesday shows.

The European spacecraft put itself into orbit around 67P on Aug. 6, 2014, and three months later dispatched a lander, Philae, to the surface of the comet. After bouncing to a stop, Philae completed 80 percent of a pre-programmed, three-day series of science experiments and radioed the results back to Earth before its batteries died. Attempts to put the lander back to work were unsuccessful.

Meanwhile, the Rosetta mothership accompanied the comet as it made its closest approach to the sun, about halfway between the orbits of Earth and Mars, in August 2015.  Rosetta remains in orbit around 67P, which is currently located beyond Mars.

By measuring slight shifts in radio waves transmitted to and from Rosetta, scientists were able to determine how the comet's gravity affected the spacecraft. They found that 67P is a highly porous body with about four times more dust than ice by mass, and twice as much dust as ice by volume.

The density is consistent throughout the nucleus, without large voids. The discovery supports previous findings by two other Rosetta science teams.

"The high porosity seems to be an inherent property of the nucleus material," a team of German, U.S and French scientists conclude in a study published in this week's Nature.

Comets are believed to be among the oldest and most primitive bodies in the solar system, containing materials preserved from the original cloud of gas and dust from which the sun and planets formed some 4.5 billion years ago.

Rosetta, the first probe to orbit a comet,  is expected to remain operational until September 2016 when it will join Philae by settling itself on the surface of 67P.