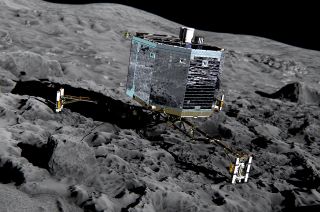 The first space probe to land on a comet has now been cut off from Earth forever.

The European Space Agency (ESA) on Wednesday (July 27) shut off the Electrical Support System (ESS) processor unit on its Rosetta probe, switching off the interface used to relay communications from the Philae lander on Comet 67P/Churyumov-Gerasimenko.

"It's time for me to say goodbye," the three-legged lander "wrote" on Twitter.

The Philae probe bounced to a history-making touchdown on Comet 67P on Nov. 12, 2014. Designed to search for water and organics of the type that could have given rise to life on Earth, the small lander initially operated for about 60 hours before entering an extended hibernation mode as a result of its solar panels being in the shadow of a cliff. [Philae Probe's Comet Landing Captured in Amazing Photos]

Seven months later, as the comet moved closer to the sun, Philae was able to power up and be heard from again. The lander made seven intermittent contacts with Rosetta, which continues to orbit the comet. The communication links, which began on June 13, 2015, were too short and unstable however, to command any scientific observations.

On July 9, 2015, after its seventh brief contact, Philae fell silent again and entered what mission managers believed to be a state of "eternal hibernation."

"In spite of this, [Rosetta's] ESS was kept on until now in the unlikely chance that Philae would regain contact," said Claudia Mignone, ESA science writer, in an update posted on Tuesday to the mission website. "Although Rosetta has reached altitudes well below 10 kilometers [6 miles] over the surface of Comet 67P ... no signal from the lander was received since July 2015."

The decision to stop listening was driven by the upcoming end for Philae's mothership, Rosetta.

"By the end of July 2016, the spacecraft will be some 520 million kilometers [323 million miles] from the Sun, and will start facing a significant loss of power," Mignone wrote. "In order to continue scientific operations over the next two months and to maximize their return, it became necessary to start reducing the power consumed by the non-essential payload components on board."

Heading towards the orbit of Jupiter, Rosetta will complete its 12-year mission by becoming the second spacecraft to land on a comet. On Sept. 30, the orbiter will be directed to descend to the comet's surface, following the Philae lander into history.

Communications will cease though, once Rosetta reaches the surface, and its operations will then end.

"We are trying to squeeze as many observations in [of the comet] as possible before we run out of solar power," Matt Taylor, ESA Rosetta project scientist, said in a statement from the agency.

The last six weeks will be particularly challenging as the spacecraft flies eccentric orbits around the comet.

"The closer we get to the comet, the more influence its non uniform gravity will have, requiring us to have more control on the trajectory, and therefore more maneuvers," Sylvain Lodiot, Rosetta's spacecraft operations manager said in the statement.

Ultimately, Rosetta will impact the comet's surface at about half the speed that Philae bounced to a landing in 2014.

As Philae's link to Earth was switched off on Wednesday, the lander's fans took to Twitter to bid it farewell.

"#GoodbyePhilae. Thanks, and congrats on earning your place among the great comet expeditions," wrote NASA's Planetary Sciences Division.

"#GoodbyePhilae, congrats on going out in style!" tweeted the team behind the Cassini mission at Saturn.

The German Space Agency (DLR) is inviting the public to share their own farewells through Aug. 8 by posting photos of themselves saying goodbye to Philae using the hashtag #GoodbyePhilae on social media.