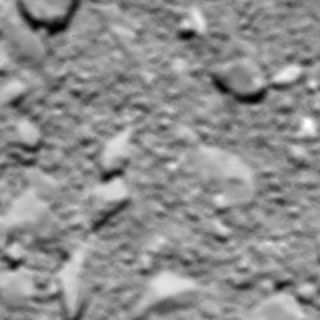 The last image Rosetta transmitted to Earth before it touched Comet 67P's surface on Sept. 30, 2016. The European probe took the photo when it was just 65 feet (20 meters) from the icy body.
(Image: © ESA/Rosetta/MPS for OSIRIS Team MPS/UPD/LAM/IAA/SSO/INTA/UPM/DASP/IDA)

"That's the end of Rosetta," said Holger Sierks, the principal investigator for Rosetta's OSIRIS camera, as he showed reporters here at the European Space Operations Centre the final image snapped from an estimated altitude of about 65 feet (20 meters). [See all of Rosetta's last photos of Comet 67P]

The view is slightly blurry — Sierks said his team still has to sharpen the images — but the gravelly surface of the comet is clearly visible.

Rosetta, which had been orbiting Comet 67P for the last two years, was not designed to survive a landing. But when it came time for the 12-year mission to end, ESA officials decided to send the probe on a collision course with the comet so the spacecraft could collect some last-minute, up-close data on this icy cosmic body.

The landing site was a region called Ma'at on the smaller of the comet's two lobes, sometimes called the "head" because the comet is shaped like a rubber duck. This region was chosen because it has several active pits, some over 330 feet (100 m) wide, where the comet's jets of gas and dust emerge. Mission managers said they had been hoping Rosetta could peer inside one of the pits dubbed Deir el-Medina. The walls of these pits also have "goose bumps" that scientists said they wanted to study in greater detail, because these lumps could represent the comet's internal building blocks.

"They give us clues about the origin of cometary nuclei," said Sierks.

The images haven't been fully analyzed yet, but Sierks said already it seems like the views inside the pit show some of the details the scientists are after.