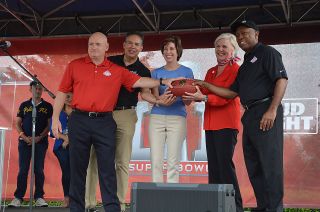 HOUSTON — A football flown for five months aboard the International Space Station has now become a symbol of the next Super Bowl to be played in Houston.

Astronaut Scott Kelly, who returned from a record 340-day expedition on the orbiting outpost earlier this year, handed off the flown football at Space Center Houston on Saturday (Aug. 27).

"This really is an out of this world acceptance of a football," said Sallie Sargent, the president and CEO of the Houston Super Bowl Host Committee, during the "Touchdown Tour" opening event. [9 Weird Things That Flew on NASA's Space Shuttles]

"This ball is a symbol not only of Super Bowl LI coming to Houston, but a symbol of the great partnership we have with NASA and the Johnson Space Center. They were our first friends once we were awarded the game, and nothing says 'future' more than NASA and space exploration," said Sargent.

The theme for Super Bowl LI (51), to be played on Feb. 5, 2017 at NRG Stadium, is the future of the game, including a focus on space exploration.

"Football and space? How much better could it get, right?" said Ochoa, who flew aboard four space shuttles missions in the 1990s.

Before passing the ball, Kelly joked about how the football was prepared for its journey back to Earth.

"When we were sending it home, it didn't look like this," he said. "I figured in space you have a limited air supply, so I actually deflated it so we could keep the air on the space station."

"Because in space, you never know when you are going to need some extra air," Kelly remarked.

In addition to the handoff ceremony, the Touchdown Tour at Space Center Houston included a robotic football game, expert panel discussions about past, present and future of space exploration and opportunities for the public to meet several other astronauts. In addition to Kelly and Ochoa, the event included space shuttle commanders Brian Duffy, Lee Archambault and Mark Polansky, spacewalker Jerry Ross and space station flight engineer Clayton Anderson, who also flew a football on the orbiting laboratory in 2007.

"In space, you can play by yourself," described Anderson. "You can kick off and receive it, and you can fly with it and pass it to yourself."

"You can throw it from one end of a space station module and float down and catch it on the other end," he said.

"It was great cause I could throw it really, really far, unlike right now," Kelly said. "It was fun to play with on board the space station."