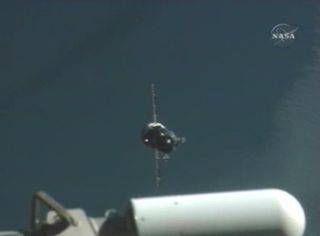 The Russian cargo ship Progress 24 is backdropped by a blue Earth as it nears the International Space Station for a Jan. 19, 2007 docking.
(Image: © NASA TV.)

Three astronauts living aboard the International SpaceStation (ISS) welcomed an unmanned visitor bearing gifts late Friday as a freshcargo ship eased into a berth outside their orbital laboratory.

The Russian-builtProgress 24 spacecraft docked at the ISS on time at 9:59 p.m. EST (0259 Jan. 20GMT) with perfect precision as the station's Expedition14 astronaut crew looked on [image].

"We can see Progressin the window, it's just a perfect visual," said Expedition14 flight engineer Mikhail Tyurin from inside the ISS as the cargo shiparrived [image].

Progress 24ferried more than 2.5 tons of fresh supplies for Tyurin and his Expedition 14crewmates: NASA's mission commanderMichael Lopez-Alegria and flightengineer Sunita Williams. The space freighter's arrival ended a two-daytrek that began with a Jan.17 launch just one day after the ISS crew jettisonedthe older Progress 22 cargo ship from its Pirs docking compartmentperch to make way for the new delivery [image].

Tyurin, who also serves asthe Expedition 14 Soyuz commander, stood ready to take remote control ofProgress 24 and guide it in manually should it deviate from an automated flightpath, but the spacecraft flew true [image].Docking occurred as the ISS and Progress 24 passed about 220 miles (354 kilometers)above the Atlantic Ocean just off southeast coast of Uruguay.

Unlike the last Progress vehicleto arrive at the ISS -- Progress23 -- there was no sign of any malfunction with a Progress 24 navigationantenna designed to fold into a stowed position just before docking.

"We aimed all of ouroptical hardware at the antenna, so we are monitoring," Tyurin said as Progress24 closed in on its docking port. "The antenna is closed."

Russian flight controllersbelieve the driving system designed to stow the Progress 23 antenna failed towork properly. An inspection of the still-deployed antenna by Tyurin andLopez-Alegria during a Novemberspacewalk found it wedged against a handrail near the vehicle's berth atthe aft end of the space station's Zvezdaservice module. The Expedition 14 astronauts will stage a spacewalk no earlierthan Feb. 22 to cut a wire to free the antenna and lash it into place againstthe Progress 23 hull, NASA officials said.

But before that spacewalk,the Expedition 14 astronauts have a long night ahead to close out theirpost-docking duties.

Hatches between the ISS andProgress 24 are expected to be opened at about 2:00 a.m. EST (0700 GMT)Saturday, with the newly arrived spacecraft's systems to be deactivated about30 minutes later. The ISS Expedition 14 crew took a nap earlier Friday to bewell-rested for Progress 24's arrival, awaking at about 6:00 p.m. EST (2300GMT) to ready the ISS for its newest visiting spacecraft.

Over the next few days, thespace station astronauts will haul the new Progress 24 supplies into the ISS. Lopez-Alegriaand Williams will also gear up for three spacewalks within a two-week period --an ISS first for an expedition crew -- to overhaul the station's cooling system,NASA officials said.