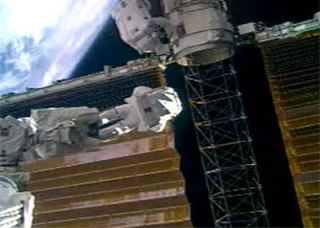 "'Wow,' isabout the only thing I can say," Kirk Shireman, NASA's ISS deputy program manager,said late Monday after the spacewalk'ssuccess. "It was really an emotional rollercoaster today."

EuropeanSpace Agency astronaut ChristerFuglesang and veteran NASA spaceflyer RobertCurbeam shook, poked, prodded and coaxed a reluctant solar array into itsstorage boxes on the station's six-year-oldPort 6 truss during six hours and 38 minutes of orbital work [image].They worked in concert with flight controllers and their crewmates aboard theISS and docked shuttle Discovery.

Snagsbetween the array's guide wires and metal grommets, or eyelets, called forCurbeam to employ mostly improvised tools: a scraper designed to repair shuttleheat shields, extension bars for loosening sticky ISS bolts and others, all ofwhich were covered in orange tape to ward off arcs of electricity -- a hazardwhen working near the solar wings, NASA said [image1, image2].

"Beamer hadus on the edge of our seats," Tricia Mack, NASA's lead spacewalk officer forthe astronaut's STS-116mission aboard Discovery, told reporters of Curbeam after the spacewalk.

NASAengineers expected some solar array guide wires to stick, but they didn'texpect it to billow out in loose loops when Curbeam plucked on it to freegrommets.

"There wasa groan, I think people heard that all over the building," Shireman said.

After somediscussion in space and on Earth, Curbeam tugged a bit more on the line and it retractedback onto its spool.

Mack saidCurbeam, known for keeping a cool head and his quick reaction times, did not disappoint.He even set a newrecord for the number of spacewalks -- four -- performed by a shuttle astronautduring an orbiter flight, she added.

Curbeamalso jumped from 13th to fifth on the list of all-time spacewalkersduring the latest orbital work, NASA officials said.

During thespacewalk, Fuglesang counted in a variety of languages aside from English --Spanish and French to name a few -- as he shook the balky solar array.

At onepoint, when again asked to shake the solar wing, he mentioned he had run out oflanguages. But despite the levity, both spacewalkers were on task, missionmanagers said.

Monday'sspacewalk marked the fourth and last for NASA's STS-116mission aboard the Discovery orbiter and capped a week of ISSconstruction and crew change. The shuttle crew is slated to undock aboardDiscovery at 5:09 p.m. EST (2209 GMT) today.