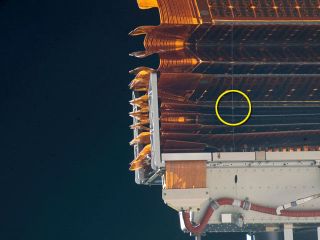 This photo highlights the P6 solar array guide wire and its grommet (circle) which is though to snag due to friction and prevent the solar wing from folding properly.
(Image: © NASA.)

"We suspect that with some minorexcitation of the arrays, these will clear themselves," Mike Suffredini, ISS program manager for NASA, told reportershere at the Johnson Space Center.

The P6 array, which stretches outover the space station's port side, has been idlein mid-retraction since Wednesday, when initial efforts by Discovery andISS astronauts to pack it away remotely were stymied by incorrect folds [image].Friction between the array's guide wires as they thread through a series ofgrommets appears to be the culprit, and if the wiggle test doesn't do thetrick, mission managers will meet and discuss whether to try a secondtechnique, flight controllers said [image].

"There's actually another techniquethat will make you laugh a little," Suffredini said.

"It turned out he was doing more ofa workout than just on himself," Suffredinisaid of Chiao. "He was working out the arrays aswell."

ISS flight controllers hope eitherof the two non-spacewalk approaches will be successful since mounting a fourthspacewalk during Discovery's STS-116 mission not only carries timepressures, but also shock hazards along with the inherentrisk of leaving a spacecraft for orbital work. The space station's Expedition14 mission also has a packed spacewalk schedule, mission managers said.

"I think we'll clear this with [intravehiclar] steps," Suffredinisaid, adding that if one of the two internal approaches is successful today theP6 array could be retracted later this afternoon. "No matter what we do, thearray will always be structurally sound."

While it need not be retractedcompletely during the STS-116mission, the solar wing and another on the P6 truss must be packed awaybefore the segment can be relocated to the end of the recentlyinstalled Port 5 truss later next year, and may have to be addressed beforea Russian spacecraft docks at an Earth-facing berth in April.

If a spacewalk is required, flightcontrollers believe a simple tug on the stuck guide wire is enough to freesnags, but are still debating whether to use the station's roboticarm or foot restraints to hold a spacewalker in place. To squeeze in afourth spacewalk for Discovery's STS-116 crew by Flight Day 9 of their mission,ISS managers would have to make the decision by the end of today. A Flight Day10 spacewalk plan could give managers an extra day to decide, Suffredini said.

Discovery astronauts concludedFlight Day 6 of their 12-day mission when they went to sleep at 1:47 a.m. EST(0447 GMT) today.

The astronauts spent five hoursrewiring half of the space station's power system to shift from a temporaryarrangement to its permanent form and also activated the orbital laboratory'sprimary cooling system for the first time.

"Today went as close to without ahitch as you can possibly have a spacewalk can go," Curry said Thursday,admitting that the sheer amount of tools, equipment and machinery that had towork as advertised was daunting. "And all that stuff worked exactly andprecisely the way folks designed it...the crew, both of them, they were justmachines."

The spacewalk'ssuccess bolsters hopes that a similar plan to rewire the remaining half of theISS power grid on Saturday will go as planned, NASA officials said.

The joint ISS and Discovery shuttlecrews have a rather light day ahead of them Friday. They are scheduled toperform a series of cargo transfers and speak with reporters on Earththroughout the day, with some time reserved for personal time, NASA officialssaid.