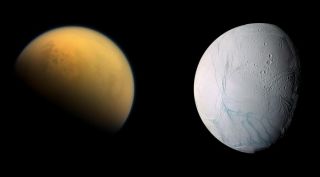 WASHINGTON — NASA has added two potentially habitable moons of Saturn to the list of possible destinations for its next billion-dollar planetary science mission.

In a Jan. 6 "community announcement" email to scientists, NASA said that "Ocean Worlds," which it defined as Saturn's moons Titan and Enceladus, were now included in a set of six classes of missions that the agency would accept proposals for in the next New Frontiers competition in 2017.

Scientists have found evidence in recent years that both moons could be habitable. Titan, Saturn's largest moon, has a dense atmosphere and lakes of liquid hydrocarbon on its surface. Smaller Enceladus likely has an ocean of liquid water beneath its icy surface.

The decision comes after the House, in the report accompanying its version of a fiscal year 2016 appropriations bill, directed NASA to establish an "Ocean Worlds Exploration Program," specifically citing discoveries made on Titan and Enceladus.

"The Committee directs NASA to create an Ocean World Exploration Program whose primary goal is to discover extant life on another world using a mix of Discovery, New Frontiers and flagship class missions consistent with the recommendations of current and future Planetary Decadal surveys," the report stated. That language was not included in the report accompanying the final omnibus spending bill, however.

Scientists have previously proposed smaller Discovery-class missions to both moons. Titan Mare Explorer, a mission that would have landed a probe in one of Titan's liquid hydrocarbon lakes, was a finalist in the previous Discovery competition in 2012 ultimately won by the Mars InSight Lander. Enceladus Life Finder, a mission to perform multiple flybys of Enceladus, was submitted to the latest Discovery competition in 2015, but was not among the five finalists NASA selected in September for further study.

Unlike the Discovery program, which has few restrictions on destinations for missions proposed by scientists, NASA limits the New Frontiers program to a narrow set of potential missions identified by scientists as part of the decadal survey process. Prior to the addition of Titan and Enceladus, NASA had identified five eligible categories of missions for the upcoming New Frontiers competition, based on recommendations made in the latest decadal survey report in 2011:

NASA plans to issue a draft version of the New Frontiers announcement of opportunity in July and seek feedback. A final version is scheduled for release in January 2017, with proposals due to the agency 90 days later. NASA will select several proposals for additional concept studies by November 2017. That schedule calls for a final decision on the mission by May 2019, with launch by 2024.

The New Frontiers mission will have a cost cap for development of $850 million. That total does not include launch or operations, which would likely push the mission's total cost to more than $1 billion.

The announcement also confirmed that NASA will make available up to three nuclear power systems known as multi-mission radioisotope thermoelectric generators (MMRTGs). The cost of using them will be included in the $850 million cap, with missions assessed costs between $105 million and $165 million depending on the number of MMRTGs used. Adding the nuclear power systems would also delay the mission's launch to 2025.