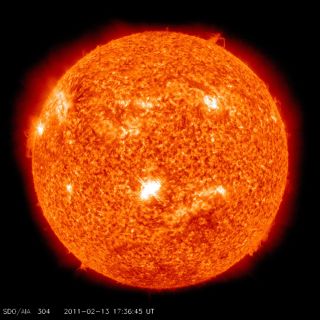 The big burning ball of gas that holds nine major planets in orbit is not unlike many stars in the universe. The Sun makes up 99.86 percent of the solar system's mass and provides the energy that both sustains and endangers us. Scientists have lately begun calling its tremendous outpouring of energy "space weather."

The Sun can be divided into three main layers: a core, a radiative zone, and a convective zone. The Sun's energy comes from thermonuclear reactions (converting hydrogen to helium) in the core, where the temperature is 15 to 25 million degrees. The energy radiates through the middle layer, then bubbles and boils to the surface in a process called convection. Charged particles, called the solar wind, stream out at a million miles an hour.

Magnetic fields within the sun slow down the radiation of heat in some areas, causing sunspots, which are cool areas and appear as dark patches. Sunspot activity peaks every 11 years. The next peak is due in 2000.

During this so-called solar maximum, the sun will bombard Earth's atmosphere with extra doses of solar radiation. The last peak, in 1989, caused power blackouts, knocked satellites out of orbit and disrupted radio communications. (See our special report on Sunspots.)

Though NASA scientists aren't predicting any record-setting space weather in 2000, the peak is expected to be above average. "It's like saying we're going to have a mild or cold winter," says Dr. David Hathaway at NASA's Marshall Space Flight Center. But as communications rely increasingly on satellites, there are more targets in the sky and more significant consequences to any disruptions.

And there may be more to sunspots than disrupted communications. An active sun, known to heat the Earth's outer atmosphere, may also affect our climate. Scientists say a small ice age from 1645 to 1715 corresponded to a time of reduced solar activity, and current rises in temperatures might be related to increased solar activity.

The Sun frequently spews plumes of energy, essentially bursts of solar wind. These solar flares contain Gamma rays and X-rays, plus energized particles (protons and electrons). Energy is equal to a billion megatons of TNT is released in a matter of minutes. Flare activity picks up as sunspots increase.

The Sun's charged, high-speed particles push and shape Earth's magnetic field into a teardrop shape. The magnetic field protects Earth from most of the harmful solar radiation, but extreme flares can disable satellites and disrupt communication signals. The charged particles also excite oxygen and nitrogen in the atmosphere to create the aurora borealis, or northern lights. More solar radiation during the upcoming solar maximum means an increase in the aurora.

Similar to a solar flare, a coronal mass ejection is a bubble of gas and charged particles ejected over several hours. It can occur with or without solar flares, and can also threaten Earth's atmosphere.

If you stood on the Sun, its gravity would make you feel 38 times more heavy than you do on Earth. But it's kind of hot, so please don't try it.