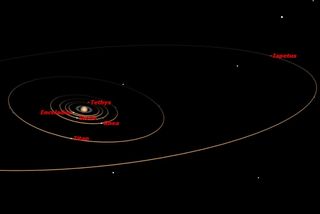 Saturn will shine during the month of August, and with luck stargazers will be able to catch a glimpse of Mars and Venus as well, if they know when to look, with the help of this day-by-day breakdown.

Among the planets to look for this month, the innermost to the sun, Mercury, is very low to the west-southwest horizon at dusk and exceedingly difficult to see, especially from the northern United States. In the morning sky, Mars is actually a bit higher above the east-northeast horizon, but it is also dimmer than Mercury. If you're wondering where the "dynamic duo" of Venus and Jupiter are, they are pretty much out of sight because they are closely aligned with the sun in the sky. Venus will reappear low in the dawn twilight toward the end of the month. Truth be told, the only bright planet that can readily be seen all through August is Saturn, well up in the south-southwest at dusk and not setting until the middle of the night.

Here are the best planets to look for this month, and when — remember, when measuring the angular separation between two celestial objects, your clenched fist held at arm’s length measures roughly 10 degrees. [Sky Maps for the Best Skywatching Sights of August]

Aug. 1 – Mars is slowly — very slowly — returning to dawn visibility and begins its biennial climb out of the solar glare today. This dim and distant planet rises 70 minutes before the sun this morning and will appear two hours before sunup by the 31st. To see it, look in the east-northeast, below Castor and Pollux in Gemini. Mars is currently 239 million miles from Earth; by the end of next May it will be more than five times closer and will appear more than 30 times brighter.

Aug. 6 –About an hour before sunrise, look low toward the east-northeast for Castor and Pollux and extend an imaginary line about 1.5 times the distance between these two stars toward the horizon: You'll be taken directly to Mars, a yellow-orange speck currently shining at an unusually dim magnitude of +1.7. Binoculars will certainly help.

Aug. 7 –The planets Mercury and Jupiter, along with the blue first-magnitude star Regulus, cluster together into a tight triangle less than 1.5 degrees wide; a spectacular sight indeed, but all but invisible to those living north of the equator. From the southern hemisphere, this remarkable trio is easy to detect in the dusk, well above the horizon. But from the United States, Europe and Japan, Jupiter is lost in the sun's glare and will be in conjunction with the sun on the 26th. Mercury's visibility will improve only marginally during August; it is barely visible during the last days of August and the first half of September, setting less than an hour after the sun. Mercury reaches its greatest elongation from the sun on September 4.

Aug. 15 –Venus is in conjunction with the sun. This is what's known as its inferior conjunction — meaning that it's on the near side of its orbit to the Earth, passing closer than any other planet can. Because of its proximity to Earth, it races through this position and shoots up to shine low in the dawn sky hardly more than a week later. Actually, Venus is so bright that at the start of August, preconjunction, you can try glimpsing it very low in the west shortly after sunset. At month's end, look for it low in the east before sunrise. Throughout this period, Venus is a very thin, long crescent. Get a telescope on it if you can.

Aug. 20 –Mars passes within a half-degree of the center of the Beehive star cluster this morning. Train binoculars on Mars and you'll see it embedded within a cluster of tiny, scattered stars; a charming sight!

Aug. 22 – The first quarter moon occurs at 3:31 p.m. EDT. As darkness falls, the moon will be in the south-southwest about one-quarter of the way up from the horizon to the point directly overhead. Take note of the bright yellow-white "star" to the lower right of the moon — that's the planet Saturn poised in the constellation Scorpius. It moves only sluggishly against the stars all month; on Aug. 2 it ended retrograde (westward) motion and began moving eastward. The planet lies about 13 degrees to the upper right of Antares, the ruby heart of the Scorpion, which has served as a good marker for Saturn's retrograde motion since mid-March. This fall it will be fun to watch Saturn draw closer to Antares again until planet and star disappear in the twilight in early November.

Aug. 26 – Jupiter is in conjunction with the sun and enters the morning sky, though it will take a few weeks for it to emerge back into view from the glare of the sun.