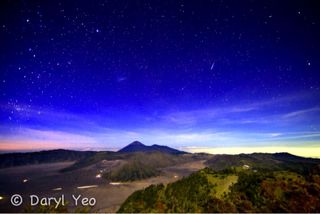 The Taurid meteors, sometimes called the "Halloween fireballs," show up between mid-October and mid-November, and these slow and majestic meteors are typically at their best from Nov. 5 through Nov. 12.

Unfortunately, the presence of a brilliant moon will seriously affect this year's Taurid meteor shower. The moon, in fact, turns full on Thursday (Nov. 6), the so-called "Beaver Moon" of November. On that night, bright moonlight will flood the sky much of the night, squelching all but the brightest meteors. Thereafter, as the moon sets later in the evening and slowly wanes in brightness, the visibility will gradually improve.

Moonrise on Thursday comes at around 5 p.m. With each passing night, the moon will rise on average about 50 minutes later, and the window of dark-sky hours (prior to moonrise) opens a little wider. By the evening of Nov. 12, the moon will be a couple of nights from last-quarter phase and will rise at around 10 p.m. Nov. 12 is probably the best night to watch for Taurid meteors, as there will be about four hours of dark, moonless skies. [Best Night Sky Events of November 2014: Sky Maps (Gallery)]

Each evening, until the time the moon comes up above the horizon, up to about 15 meteors may appear per hour. They are often yellowish-orange and, as meteors go, appear to move rather slowly. Their name comes from the way they seem to radiate from the constellation Taurus, the Bull, which sits low in the east a couple of hours after sundown and is almost directly overhead by around 1:30 a.m.

Meteors, popularly referred to as "shooting stars," are generated when debris enters and burns up in Earth's atmosphere. The Taurids arise from debris left behind by Encke's Comet, or perhaps by a much larger comet that left Encke and a lot of other rubble in its wake upon disintegrating.

Indeed, the Taurid debris stream contains noticeably larger fragments than those shed by other comets, which is why in certain years this rather elderly meteor stream delivers a few unusually bright meteors known as "fireballs."

Two meteor streams for the price of one

The Taurids are actually divided into the Northern Taurids and the Southern Taurids, an example of what happens to a meteor stream when it grows old.

Even after they were first shed, the particles making up the Taurids could not have been moving in exactly the same orbit as their parent comet. And their slight divergence grew over time. Meanwhile, the sun is not the only body guiding the particles' orbits; the planets exert their own subtle gravitational effects on the stream. As the positions of the planets constantly change, the particles pass nearer to the planets on some revolutions than on others, diverting parts of the stream, fanning it out and splitting it. [Our Solar System: A Photo Tour of the Planets]

So, what was originally one stream diffuses into a cloud of minor streams and isolated particles in individual orbits. These cross Earth's orbit at yet more widely scattered times of the year and coming from more scattered directions until they are entirely stirred into the general haze of dust in the solar system.

The two radiants of the Taurid streams lie just south of the Pleiades stars, the so-called "Seven Sisters." So, during the next couple of weeks, if you see a bright, slightly orange-tinted meteor sliding rather lazily away from that famous little smudge of stars, you can feel sure it is a Taurid.

Dr. Victor Clube, an English astrophysicist and an expert on comets and cosmology, suggested in 1992 that the Taurid meteor stream contains perhaps a half-dozen full-size asteroids whose orbits place them squarely in the stream.

Clube and his colleagues argue that the Taurids' range of orbits indicates they were all shed by a huge comet, originally 100 miles (160 kilometers) across or more, that entered the inner solar system some 20,000 years ago. By 10,000 years ago, it was desiccated and brittle, the idea goes; Encke's Comet might actually be the biggest leftover chunk.

Encke’s has the shortest known orbital period for a comet, taking only 3.3 years to make one complete trip around the sun. Meteor expert David Asher has advanced a theory of a "resonant meteoroid swarm" within the Taurid Complex. Briefly, this theory predicts that in some years, Earth is hit by a greater-than-average number of meteoroids capable of producing Taurid fireballs.

According to Asher, the next "swarm year" is 2015. In addition, the moon will slim down from a crescent to new phase by Nov. 11 of next year, meaning that in 2015 there will be little or no interference from the moon and it will be an excellent year to watch for the Taurus.

As the fans of the old Brooklyn Dodgers might have said: "Just wait 'til next year!"

Editor's Note: If you have an amazing image of a Taurid meteor or any other skywatching photo you'd like to share for a possible story or image gallery, please contact managing editor Tariq Malik at spacephotos@space.com.