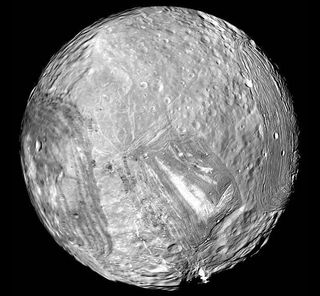 The strange appearance of Uranus' moon Miranda may finally have an explanation.

Miranda resembles Frankenstein's monster — a bizarre jumble of parts that didn't quite merge properly. Now, researchers suggest they may know why Miranda looks so odd: Constant squeezing and stretching from Uranus caused the moon's insides to heat up and churn.

Miranda is the innermost of Uranus' five major moons. Though Miranda is only 293 miles (471 kilometers) wide — about one-seventh as large as Earth's moon — this ball of ice and rock possesses one of the oddest and most varied landscapes known among extraterrestrial bodies, including giant canyons up to 12 times deeper than the Grand Canyon. [Photos of Uranus, the Tilted Giant Planet]

Miranda has three giant features known as coronae that are unique among known objects in the solar system. They are shaped crudely, either like ovals or trapezoids, and each is least 120 miles (200 km) wide.

The coronae are separated from their more heavily cratered surroundings by belts of concentric ridges and troughs, making the coronae look like mismatched patches on a moth-eaten coat. The three coronae — Arden, Elsinore and Inverness — are named after locations in Shakespeare's plays.

Researchers have long wondered how the coronae formed. One possibility is that Miranda may have been disrupted by some catastrophic impact, after which its pieces chaotically reassembled. The coronae formed as rocky material sank downward, triggering concentric wrinkles on Miranda's surface as it contracted, this idea goes.

Another possibility — one suggested by most scientists in the field — is that the coronae formed as buoyant domes of ice rose, causing Miranda's surface to crumple as matter was added to it. However, it was not known where the heat to drive this ice upward might have come from. Since Miranda is relatively small, it would have cooled quickly after its creation, and it does not have the radioactive material that Earth possesses to help keep its innards hot.

Now, researchers show the gravitational pull of Uranus may have distorted Miranda enough to heat it up, leading its innards to churn much as Earth's does — thus explaining the coronae.

The gravity of Uranus pulls on Miranda, generating tidal forces, much as Earth's moondoes to Earth. Tidal forces elsewhere in the solar system can be far greater than tidal effects on Earth — for instance, Jupiter's gravitational pull causes the solid rock surface of its third-largest moon Io to bulge up and down by as much as 300 feet (90 meters), generating enough heat to drive volcanic eruptions.

Miranda's orbit around Uranus was once eccentric, or oval-shaped, moving it closer to and farther from Uranus over time. Three-dimensional computer simulations of Miranda's interior performed for the new study revealed the resulting tidal forces would repeatedly stretch and squeeze Miranda enough to generate substantial amounts of heat — about 5 gigawatts, or 2.5 times the peak power output of the huge Hoover Dam on the southwestern United States' Colorado River.

This heat would cause Miranda's icy mantle to churn with convection much like Earth's mantle of hot rock does. During convection, warm buoyant ice would have risen to Miranda's surface to contort it and create the coronae.

The research team's computer models accurately explained the locations of the coronae and the deformation patterns within the coronae, Hammond said.

"The features on Miranda may look really strange, but they formed in a way that is really similar to what happens on Earth, where convection in the interior drives surface deformation," Hammond told Space.com.

However, the scientists noted that for convection to drive Miranda's surface deformation, the moon's surface must be much weaker than predicted by laboratory experiments.

"The Earth has the same problem: For convection to deform Earth's surface, rocks have to behave weaker than expected," Hammond said. "It'd be interesting to see what might explain the weakness seen in the surfaces of Miranda, Earth and elsewhere."

So far, scientists only know what Miranda's southern hemisphere looks like. NASA's Voyager 2 spacecraft photographed this part of the moon during its 1986 Uranus flyby but did not image Miranda's northern hemisphere.

"It'd be really interesting to think about what could be on the other side of Miranda," Hammond said. "Our study predicts there'd be one additional corona on Miranda's other side, and I would love to live long enough for a mission to go back to Uranus and test that hypothesis."

Hammond and his colleague Amy Barr detailed their findings online Sept. 15 in the journal Geology.