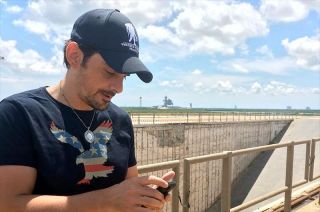 Country music star Brad Paisley uses his phone to 'leak' his new song, "American Flag on the Moon" from NASA's historic Launch Pad 39B at the Kennedy Space Center in Florida.
(Image: © Twitter/@bradpaisley)

"I'm at NASA's Apollo launch pad in [Florida], leaking my new song," Paisley wrote on Twitter, sharing a photograph of him standing on the agency's historic Pad 39B, where a Saturn V rocket once launched three American astronauts to the moon.

In the background of Paisley's photo is Launch Pad 39A, where the first men who landed on the moon left Earth.

Paisley's tweet, which included a link to the new song, got a quick response from the International Space Station. [Best Space Music Videos Ever]

"Hold on @BradPaisley, we don't usually like leaks at the launch pad," astronaut Reid Wiseman replied, attaching a photo of Florida from his vantage point in orbit.

"Thanks for the amazing view," the singer wrote in reply to the Expedition 40 crewmember. "Hope you love the song!"

In "American Flag on the Moon," Paisley dares Americans to dream again and "believe in impossible things."

"I mean, after all, there's an American flag on the moon," he sings.

According to an interview with Billboard magazine, Paisley was inspired to write the song after his young son tried to see the flag left by Apollo 11 moonwalkers Neil Armstrong and Buzz Aldrin in 1969. Paisley recalls what happened in his lyrics.

"So my five-year-old, he learned about the lunar landing and he walked out and started staring at the sky," Paisley sings. "He stood there for awhile and got a great big smile, and said, 'Dad, I think I can see it, can you?'"

Between July 1969 and December 1972, twelve American astronauts landed on the moon, leaving behind six United States flags. Although they are far too small to be visible from Earth, NASA's Lunar Reconnaissance Orbiter (LRO) photographed the shadows cast by five of the six flags in 2012, confirming that they were still standing.

"American Flag on the Moon" is a single off of Paisley's new album, "Moonshine in the Trunk," to be released Aug. 25. Paisley was in Florida Saturday as part of his "Country Nation" tour.

In addition to visiting the launch pad, Paisley also toured inside and stood on top of Kennedy Space Center's 52-story-tall Vehicle Assembly Building where the Saturn V rockets, and later the space shuttles, were assembled for flight. Today, the voluminous building is being prepared to support NASA's next-generation heavy-lift booster, called the Space Launch System.

"We're the children of explorers," he sings. "Led the world, fought tyranny, touched the stars, brought liberty – let's do that again."

Later in the song, Paisley adds, "in 200 years, think about all we've done so far. I don't see any reason why tomorrow can't be ours."

NASA appeared to agree with the song, writing to Paisley on Twitter, "We'll be planting a flag on Mars next."

Click through to collectSPACE.com to see photographs of Brad Paisley at NASA’s historic Launch Pad 39B at the Kennedy Space Center in Florida.