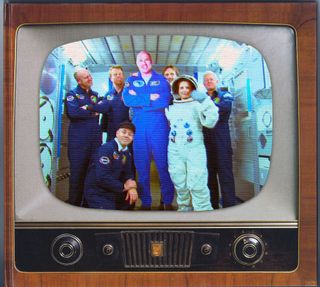 The Beatles tribute band Love & Mersey recorded "Back at the ISS" for astronauts living on the International Space Station.
(Image: © Love & Mersey)

Here's a look at some of our favorite space and space-themed music video from NASA and others through the years. Tip: Don't miss Chris Hadfield's amazing "Space Oddity" music video in here.

All About That Space

The music video from 2014 shows a group of plucky young NASA interns dancing, lip synching and having fun at Johnson Space Center in Houston with their parody of the hit Meghan Trainor song "All About that Bass."

The rare astronomical event of Venus crossing the face of the sun on June 6, 2012, was caught by on video by NASA Goddard Space Flight Center in different wavelengths of light. The Solar Dynamics Observatory (SDO) took the images, which have 8x finer resolution than HDT. Video editors trimmed six hours of footage down to a quick 3 minutes, and added stirring music to the moving images.

Astronaut Cady Coleman brought her flute aboard the International Space Station, where from 220 miles above the Earth, she played a tune about a seafaring vessel. The performance of Feb. 9, 2011, was recorded in an NPR interview. In addition to her own flute, she also brought instruments on loan from the Irish international folk superstars, The Chieftains, as well as Ian Anderson, flautist and lead singer of Jethro Tull.

That long-running prog-rock band (of "Aqualung" fame) outstripped perhaps all of their contemporaries in spacy-ness when later Anderson and Coleman played an Earth-space duet during a Tull concert.

Ambient music by Jonn Serrie provides an atmospheric audio background for these images of space shuttle Discovery during mission STS-133, after the spacecraft undocked from the International Space Station. The flight marked the end of Discovery’s life in space, and took place during Feb.-March 2011. Discovery’s final flyaround of the ISS provided views of the Sahara Desert and the coasts of Africa and Europe.

Internet celebrity Camilla Corona SDO flew to an altitude of 120,000 feet (about 36,500 meters) aboard a helium balloon with no protective gear other than a helmet and a knitted sweater, courtesy of the Members of the Earth to Sky student group at Bishop Union High School in Bishop, CA. Fortunately, Camilla suffered no ill effects, as she is a chicken made of rubber. Rock supergroup Chickenfoot appropriately supplied the music ("Up Next") for the video. The group includes members of Van Halen and Red Hot Chili Peppers.

NASA astronaut Jeffrey Williams demonstrates flying and floating techniques of getting around the International Space Station in this music video featuring footage taken during the Expedition 13 mission in 2006. Watch the Video.

Astrophotographer Randy Halverson created this time-lapse video of the night sky above the northern United States, entitled "Temporal Distortion.” Bear McCreary, who composed the original score for the video, has written music for television shows "Battlestar Galactica," "The Walking Dead," and "Eureka." Stunning meteors, the cloudy Milky Way, and even rainbow-colored auroras shine in the video. Halverson said of the video, "It is the result of 20-30 second exposures edited together over many hours to produce the time-lapse.”

To welcome the European Space Agency's third Automated Transfer Vehicle (ATV-3) to the International Space Station in March 2012, Dutch band Love and Mersey recorded the song "Back at the ISS," complete with video. A parody of the Beatles' "Back in the USSR," the song paid tribute to the band's countryman, astronaut André Kuipers, with lyrics in Dutch. The song also included English and Russian lyrics in honor of the other crew members aboard the space station

Jewel in the Night: Astronaut’s 1st Song in Space

Canadian Space Agency astronaut Chris Hadfield brought an acoustic guitar to the International Space Station in December 2012. He sang and recorded his original song, "Jewel in the Night," aboard the station. He then used social media to spread the song among his followers, the first astronaut to accomplish such a feat. If that wasn't enough music from Earth orbit, he later recorded a song with Barenaked Ladies singer Ed Robertson (who remained firmly upon the ground), and later covered David Bowie's "Space Oddity" to great acclaim (see entry #1).Watch the Video.

NASA Does the 'Harlem Shake'

Not long after the "Gangnam Style" fad faded, in early 2013 NASA got caught up in the frenzy of attention surrounding the "Harlem Shake" song by Baauer. This time, the crew at NASA's Wallops Flight Facility, based on Wallops Island on the Virginia coast, perpetrated the mimetic video seen here. (As has been pointed out all over the intertubes, the "Harlem Shake" internet meme has nothing to do with the original "Harlem Shake" dance.)

'We're NASA and We Know It'

Following NASA's successful landing of the Curosity rover on Mars, a group called Satire poked gentle (and ultimately respectful) fun at NASA with a parody of LMFAO's hit song "Sexy and I Know It," altering the lyrics to "We're NASA and we know it." Mohawk Guy Bobak Ferdowsi, whose well-known coiffure featured prominently in the video, seemed to like it, tweeting, "Well played! … don't know that we can dance like that."

Even NASA found itself swept up in the viral momentum of Korean rapper PSY's 2012 pop hit, "Gangnam Style." Workers at NASA's Johnson Space Center made time to spoof the gigantic hit with a video that included astronauts Mike Massimino, Clayton Anderson and Tracy Caldwell Dyson, among others.

In 2013, Canadian astronaut Chris Hadfield covered perhaps the most famous space song — David Bowie's "Space Oddity" — complete with an zero-g music video from  the International Space Station. After posting it on social media rocketed his ever-widening “fame” further into orbit.

At the time, the original Man Who Fell to Earth himself, David Bowie, composer of the song, tweeted his appreciation thusly: "CHRIS HADFIELD SINGS SPACE ODDITY IN SPACE! 'Hallo Spaceboy...' Commander Chris Hadfield, currently on... http://fb.me/24sZNW5ly" ("Hallo Spaceboy" is a song on Bowie’s "Outside" album.)