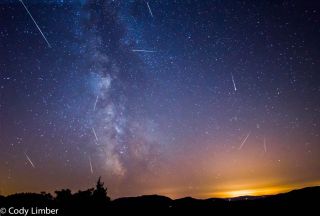 Editor's update (Aug. 12): The Perseid meteor shower is peaking now and you can watch it live online tonight. Find out how with our latest story: Perseid Meteor Shower Peaks Tonight: Watch It Live Online.

For Northern Hemisphere observers, August is usually regarded as "meteor month" with one of the best displays of the year reaching its peak near midmonth. That display is, of course, the annual Perseid meteor shower beloved by everyone from meteor enthusiasts to summer campers.

But skywatchers beware: You will be facing a major obstacle in your attempt to observe this year's Perseid meteor shower, namely, the moon. As luck would have it, this year will see the moon turn full on Aug. 10.

The bright moon will seriously hamper — if not prevent — observation of the Perseids' peak, which is predicted to occur overnight on Aug. 12-13. Moonlight will flood the sky all through most of that night and will certainly play havoc with any serious attempts to observe these meteors. [The Perseid Meteor Shower: 10 Amazing Facts]

However, there is still a chance to spot "shooting stars" in the night sky. The Perseids are actually already around, having been active only in a very weak and scattered form since around July 17.

A noticeable upswing in Perseid activity is expected to begin during this week leading up to their peak night. They are typically fast, bright and occasionally leave persistent trains. And every once in a while, a Perseid fireball will blaze forth, bright enough to be quite spectacular and more than capable to attract attention even in bright moonlight.

With this as a background, perhaps the best times to look this year will be during the predawn hours several mornings before the night of full moon. That's when the constellation Perseus (from where the meteors get their name) will stand high in the northeast night sky.

In fact, three "windows" of dark skies will be available between moonset and the first light of dawn on the mornings of Aug. 6, 7 and 8. Generally speaking, there will be about 2.75 hours of completely dark skies available on the morning of the Aug. 6. This shrinks to about 1.75 hours on Aug. 7 and to about three-quarters of an hour by the morning of the Aug 8. Check the Perseids observing table included in this guide for examples in some selected cities.

All times in the table are a.m. (pre-dawn) and are local daylight times. "Dawn" is the time when morning (astronomical) twilight begins. "Window" is the number of minutes between the time of moonset and the start of twilight.

Example: When will the sky be dark and moonless for Perseid viewing on the morning of Aug. 8 from Denver?  Answer: there will be a 40-minute period of dark skies beginning at moonset (3:41 a.m.) and continuing until dawn breaks (4:21 a.m.).

Perhaps up to a dozen or so forerunners of the main Perseid meteor showerdisplay might appear to steak by within a single hour on these mornings.

In the absence of moonlight a single observer might see up to 100 meteors per hour on the peak night, a number that sadly cannot be hoped to be approached in 2014.

In fact, it appears that this year, Perseid fans will be uttering the same lament that the old Dodger fans in Brooklyn used to: "Wait till next year!"

Editor's note: If you capture an amazing photo of a Perseid meteor, or any other night sky view, and would like to send it in for a possible gallery or story, send images and comments to managing editor Tariq Malik at: spacephotos@space.com.