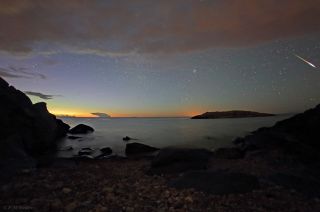 Editor's update (Aug. 12): The Perseid meteor shower is peaking now and you can watch it live online tonight. Find out how with our latest story: Perseid Meteor Shower Peaks Tonight: Watch It Live Online.

The annual Perseid meteor shower is ramping up to its peak this week, but the bright moon may interfere with the celestial fireworks display.

Every August, one of the most spectacular shooting star displays, the Perseid meteor shower, lights up the night sky, and this year it will peak late Tuesday night (Aug. 12) and early Wednesday morning. [How to See the 2014 Perseid Meteor Shower]

The 2014 Perseid meteor shower is underway now, but it will be at its best early Wednesday about two hours before dawn (your local time), when about 30 to 40 meteors could be visible each hour, weather permitting. The cosmic light show can be seen from anywhere, but the best views will be in the Northern Hemisphere. The meteors will appear to radiate out from the direction of Perseus – the constellation that the meteor shower gets its name from.

For the best view, clear weather and a dark sky far away from city lights is a must. But bright moonlight from the moon, which just emerged from its full phase, could make spotting meteors difficult. In a typical year, the Perseids' peak can bring up to 100 meteors per hour as they blaze across the sky, but the bright moonlight has brought the expected number much lower this year. Sometimes particularly large meteors can create especially bright flashes called "fireballs" that should be visible despite the intense moonlight.

NASA scientists estimate that stargazers have been enjoying the Perseids for about 2,000 years and expect that the comet was first observed as far back as 188 AD. Comet Swift-Tuttle is about  6 miles (9.7 kilometers) wide and takes about 130 years to travel around the sun.

Editor's Note: If you capture an amazing view of the Perseid meteor shower, or any other night sky view, and you'd like to share it for a potential story or image gallery, send images and comments in to managing editor Tariq Malik at spacephotos@space.com.