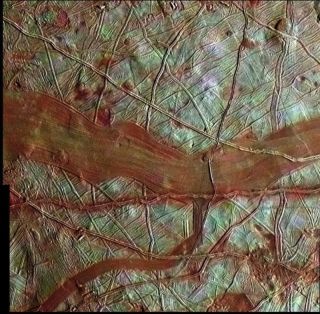 This image, created with data from NASA's Galileo spacecraft, covers a section of Europa 101 miles by 103 miles (163 km by 167 km), with the blue-white areas representing pure water ice, while the reddish areas showing where water ice is mixed with hydrated salts, potentially magnesium sulfate or sulfuric acid.
(Image: © NASA/JPL-Caltech/SETI Institute)

Under its icy crust, Jupiter's moon Europa could harbor a vast ocean of potentially life-supporting liquid water, and NASA has issued a call for proposals for science instruments for mission that aims to study the mysterious moon like never before.

Scientists have found evidence of giant waterspouts taller than Mount Everest on Europa and think the moon could hold a potentially habitable ocean with more water than all of Earth's oceans. NASA is asking for designs of scientific instruments that will help in the search for life on Europa. The winning instrument designs will be chosen next year and will be built for a future mission to explore Europa. The deadline for submitting proposals is Oct. 17.

"The possibility of life on Europa is a motivating force for scientists and engineers around the world," John Grunsfeld, associate administrator for NASA's Science Mission Directorate, said in a statement. "This solicitation will select instruments which may provide a big leap in our search to answer the question: Are we alone in the universe?" [Photos: Europa, Mysterious Icy Moon of Jupiter]

Every 10 years, the U.S. National Research Council, a nonprofit organization that advises the government, issues a report that recommends a planetary exploration strategy for NASA and the National Science Foundation. The current report (which covers 2013 to 2022) ranks an exploration of Europa among the highest priority missions.

According to the report, the future mission should focus on taking a closer look at the ocean that scientists suspect lies below the surface; characterizing its icy crust and looking for any subsurface liquid water; determining the surface composition and chemistry; examining surface features and identifying landing areas for future missions; and understanding the purpose of its magnetosphere — the magnetic field surrounding the celestial body.

NASA officials said the instrument proposals should focus on at least one of these exploration goals. The announcement calls for instruments designed for a spacecraft that will orbit Europa or complete several flybys, since astronomers do not yet have enough data to pinpoint safe landing sites on the icy moon.

One challenge with a mission to Europa is the massive amount of radiation surrounding Jupiter. Any spacecraft and instruments will need to be designed to handle the radiation. Further, a future mission will require extra caution so that anything living on Earth is not introduced into the potentially habitable Europa ocean.

NASA will select about 20 proposals in April 2015. The agency will award $25 million for those selected to further advance the designs of their instruments. The 20 reports will be reviewed, and then NASA officials will select eight winners. NASA will build the winning instruments for flight and send them to Europa.

NASA is in the process of designing a mission that will cost less than $1 billion and will still meet as many of the exploration goals as possible.