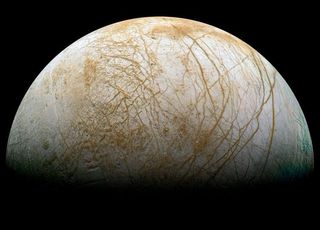 NASA hopes to launch a mission to the Jupiter moon Europa, perhaps the solar system's best bet to host alien life, a decade or so from now, officials announced Tuesday (March 4).

The White House's 2015 federal budget request, which was released Tuesday, allocates $15 million to help develop a mission to Europa, which harbors a potentially life-supporting ocean of liquid water beneath its icy shell.

"Europa is a very challenging mission operating in a really high radiation environment, and there's lots to do to prepare for it," NASA chief financial officer Beth Robinson told reporters Tuesday. "We're looking for a launch some time in the mid-2020s." [Photos: Europa, Mysterious Icy Moon of Jupiter]

The $15 million — which represents a tiny fraction of the $17.5 billion allocated to the space agency in the 2015 request — would fund very early "pre-formulation" work for a potential Europa mission, Robinson added.

"I know people have asked about the total size [of the possible mission], and we're frankly just not sure at this point," she said, adding that agency officials will reach out to the scientific community to help map out the mission.

Though the 2015 proposal marks the first time Europa was included in a federal budget request, NASA has received funding to study a possible mission to the 1,900-mile-wide (3,100 kilometers) moon in the past. Congress allocated the space agency a total of $155 million toward this end over the last two years.

Though statements by Robinson and other NASA officials suggest that the Europa mission space is wide open at this point, the best candidate to get off the ground in 2025 or so may be a concept called the Europa Clipper.

NASA researchers have been developing the Europa Clipper idea for years. The probe would orbit Jupiter but make dozens of flybys of Europa, using a variety of science instruments to study the moon's ice shell and subsurface ocean.

The Europa Clipper could conceivably cruise through the plumes of water vapor erupting from the moon's south pole — intriguing features that were discovered late last year and have helped build momentum for a Europa mission, since they offer a possible way to sample the ocean from afar.

It would probably cost about $2 billion to get the Europa Clipper off the ground, officials have estimated. That's a pretty high price tag in these tough fiscal times, so some rethinking may be required to take the Clipper — or something like it — from concept to reality.

The Europa Clipper "is what we would call a flagship, and right now the budget horizon is such that we're deferring that kind of mission until later in the decade," Jim Green, head of NASA's planetary science division, said in December at the annual fall meeting of the American Geophysical Union in San Francisco.