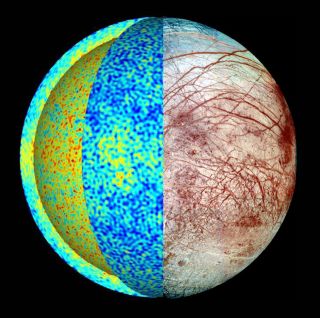 This rendering of Europa shows the temperature field in a simulation of the icy Jupiter moon's global ocean dynamics, where hot plumes (red) rise from the seafloor and cool fluid (blue) sinks down from the ice-ocean border. More heat is delivered to the ice shell near the equator, consistent with the distribution of chaos terrains on Europa. Image released Dec. 1, 2013.
(Image: © K. M. Soderlund/NASA/JPL/University of Arizona)

Churning seas beneath the icy surface of Jupiter's moon Europa might explain the chaotic jumble of cracks and ridges around its equator, scientists say.

These findings hint Europa may be even more habitable for alien life than previously thought, researchers added.

Europa is nearly the size of Earth's moon. Under an icy crust maybe 10 to 15 miles (15 to 25 kilometers) thick, investigators think Europa possesses an ocean perhaps up to 100 miles (160 km) deep. Since there is life virtually wherever there is water on Earth, researchers have long entertained the notion that Europa could support life. [See more photos of Europa, Jupiter's Icy Moon]

Europa's icy shell would hide its ocean from view. However, clues about how this underground ocean behaves might be deduced from the moon's crust, especially areas known as chaos terrains, where the ice has mysteriously warped and broken into jumbled blocks. These strange regions cover up to 40 percent of Europa's surface, clustered mostly around the Jovian moon's equator.

The origins of chaos terrain are strongly debated, but scientists think the way heat flows in the ocean beneath such terrain is critical to the explanation. To see what behavior from the underground ocean might be giving rise to chaos terrain, planetary geophysicist Krista Soderlund at the University of Texas at Austin and her colleagues devised computer models of how sea currents might circulate.

Past simulations of Europa's ocean assumed its currents flowed in a two-dimensional pattern. This pattern channeled the moon's heat to high latitudes away from the equator.

However, the new model assumed currents that flowed in a three-dimensional manner. This model suggested Europa had an ocean that roiled or convected intensely, with turbulence and heat flow strongest at low latitudes near the equator.

The scientists found two reasons why three-dimensional patterns of flow would cause ocean heat to concentrate near the equator. First, the ocean convects more vigorously there. "One way to think about this is to consider the classic example of a boiling pot of water," Soderlund said. "If the pot is much larger than the burner, water will convect more vigorously at the center than near the edges."

Second, three-dimensional patterns of flow cause systems of currents to form at low latitudes. These systems "are similar to Hadley cells on Earth, where warm material rises at the equator, cools and sinks again at higher latitudes," Soderlund explained.

The researchers suggest ocean heat drives melting and disruption of the ice on Europa. The concentration of heat near the equator could explain why chaos terrain is clustered there.

And intensely turbulent oceans would have "implications for potential habitability," Soderlund said. "The currents would enhance the transport of nutrients from the seafloor to the ice shell, especially at low latitudes."

The scientists detailed their findings online Dec. 1 in the journal Nature Geoscience.