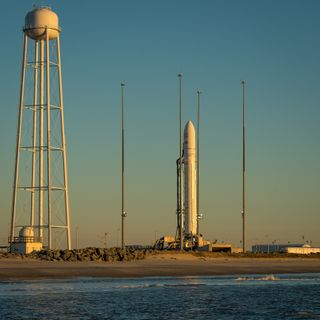 An Orbital Sciences Corporation Antares rocket is seen on launch Pad-0A during sunrise at NASA's Wallops Flight Facility on Wallops Island, Va., on Jan. 8, 2014 after its planned launch was delayed a day due to solar radiation concerns from a huge solar flare.
(Image: © NASA/Bill Ingalls)

COLORADO SPRINGS, Colo. — An AJ-26 engine slated to power Orbital Sciences Corp.’s Antares rocket on a 2015 mission to the International Space Station failed May 22 during a hot-fire test at NASA’s Stennis Space Center in Mississippi.

"Yes, there was an AJ26 engine test anomaly earlier today at Stennis. The cause is unknown at this point,” Beneski said in an email. “Engineering teams with gather and examine the data to determine the cause. It was an engine slated for a flight in 2015.”

The AJ-26 is a liquid oxygen- and kerosene-fueled engine originally built for Russia’s abandoned lunar program. Aerojet Rocketdyne of Sacramento, California, has a stockpile of the 1970s-vintage engines that it is refurbishing for Orbital Sciences.

Orbital Sciences' Antares rocket is used to transport the company's robotic Cygnus spacecraft to the space station on cargo missions. The next Cygnus mission to the orbital outpost is set to launch on June 10.

This story was provided by SpaceNews, dedicated to covering all aspects of the space industry. Follow Dan Leone @Leone_SN on Twitter.