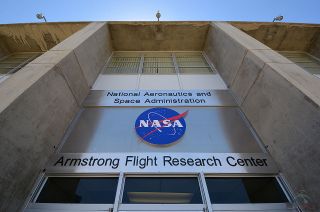 NASA's flight research center in California has been renamed for Apollo 11 astronaut Neil Armstrong, as this sign on the outside of the center's main building displays as of May 13, 2014:
(Image: © collectSPACE.com/Robert Z. Pearlman)

EDWARDS AIR FORCE BASE, Calif. — More than 50 years after Neil Armstrong stood under it for a photo, a sign outside the main building at NASA's flight research center in southern California was revealed on Tuesday (May 13), now amended with the late astronaut's name.

The unveiling, and the ceremony that preceded it, formally marked the research center's redesignation for Armstrong, the first man to walk on the moon.

"I can't think of a more appropriate way to honor Neil than to name the center where he worked at his first passion — aviation," NASA Administrator Charles Bolden said during the ceremony, which was held inside an aircraft hangar. [Photos: Neil Armstrong – American Icon Remembered]

Dryden, NASA's first deputy administrator and a prominent aeronautical engineer, now serves as the namesake for a test range that serves the Armstrong center.

"It is right and good that these men should be inextricably linked," Mark Armstrong, the astronaut's son, remarked as part of the ceremony.

"I do know that [my grandfather] would be extremely proud and honored to pass the torch, so to speak, to an amazing engineer, test pilot and astronaut," he said.

Members of both Armstrong's and Dryden's families joined the NASA Administrator and Congress members to deliver remarks as part of the formal renaming. The ceremony on Tuesday came five months after legislation was signed to redesignate the center for Armstrong. NASA put the name change into effect on March 1.

"To be here today took an act of Congress," Congressman Kevin McCarthy, who authored the bill and whose district includes the NASA center, stated. "I am very proud to say nobody voted against it."

Armstrong, who died in 2012, became the first man to set foot on the moon during the Apollo 11 mission on July 20, 1969, when he famously stated, "That's one small step for (a) man, one giant leap for mankind," as he made his first step onto the lunar surface.

Dryden, who died in 1965, served as the director of the National Advisory Committee for Aeronautics (NACA), the predecessor to NASA, and helped shape policy that led to the development of the nation's high-speed flight research program and its record-setting X-15 rocket plane.

Armstrong, prior to being an astronaut, served as a NASA research pilot flying the X-15 out of the center now bearing his name. Armstrong was also a part of the center's team that devised the Lunar Landing Research Vehicle (LLRV), which led to the craft he and other Apollo astronauts used to practice landing on the moon.

Tuesday's ceremony included the display of a large model of the X-15 and the center's remaining LLRV. [See photos of the X-15 rocket plane]

In 1962, Armstrong joined his fellow research pilots for the photo standing under the sign for NASA's Flight Research Center. Dryden's name was added on March 26, 1976.

"The renaming of this facility ... touches directly on two of dad's passions, flying and engineering. If you could have just worked a golf course in there some where, you would have hit the trifecta," Armstrong's older son, Rick, joked.

The Armstrong Flight Research Center is NASA's primary facility for flight research. In addition to its work advancing the design of civilian and military aircraft, the center also served as the primary alternate landing site for the space shuttle and is now managing launch abort systems testing and integration for NASA's Orion spacecraft.

In its almost 70-year history, the center has been known by at least ten different names. Originally called the Muroc Flight Test Unit when it was under the auspicies of NACA, the facility was later referred to as the High Speed Flight Research Station and the High Speed Flight Station before it became part of NASA in 1958.

Congress initiated the latest renaming of the center and its test range in 2007. After several attempts to get it passed, the legislation was finally approved by the Senate on Jan. 8. President Barack Obama signed it into law on Jan. 16, 2014.

Obama, in a letter to the Armstrong family, said that he was pleased to sign the bill into law renaming "this official facility, where Neil Armstrong once worked, in his honor." He added that was also pleased to "join in celebrating the legacy of another aerospace icon who paved the way for Neil" with the Hugh L. Dryden Aeronautical Test Range.

The sign that was revealed Tuesday was only the latest to be updated. Masonry signs found along the roads leading into the center were earlier amended, as was the center's website and social media accounts.

"Dad liked to come here now and then just to hang out and talk about what was going on," Rick Armstrong remarked, describing his father's return visits to the center. "I like to think that with this renaming that it will be even easier for him to keep track of what is going on in the world of flight research."

"I also hope it will inspire others, particularly young people to want to learn more about the science, technology, math and engineering fields, so they can one day achieve great things just as those here at the flight research center have been doing for so many years," he said.

Click through to collectSPACE.com for more photos and video from the Armstrong Flight Research Center renaming ceremony.