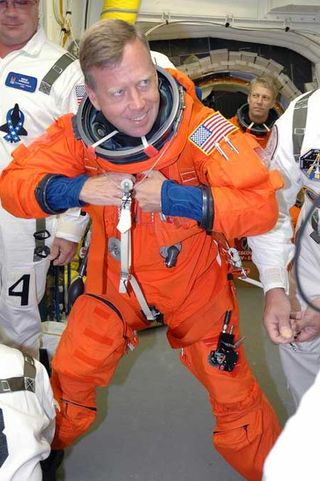 Launch Pad 39B workers help STS-121 mission commander Steven Lindsey into a flight harness as he conducts a launch dress rehearsal with his crewmates on June 15, 2006.
(Image: © NASA/Kim Shiflett.)

CAPECANAVERAL, Fla. - With a launchrehearsal in the bag, the next astronautcrew to ride NASA's space shuttle Discovery into orbit is primed for aplanned July space shot, the mission's commander said Friday.

Thismorning Lindsey and his six fellow crewmates popped into Discovery's FlightReadiness Review (FRR) meeting, where shuttle managers and engineers are inthe midst of a two-day session to go over the orbiter's launch preparations.

"We had a chance to go into that and talk to those folks for a few minutes,"Lindsey said, adding that he introduced his crew and thanked everyone whoworked hard to support Discovery's STS-121 mission. "We, like you, are lookingforward to hearing the results of that review."

NASA plansto hold a pressconference no earlier than 2:00 p.m. EDT (1800 GMT) Saturday on the FRRmeeting, which is expected to yield a firm launch date for Discovery. Themission has a flight window that stretches between July 1 and July 19.

Discovery'sSTS-121 crew, however, will not be at KSC to listen in on the FRR results.After two days of trainingand launch rehearsals, the astronauts headed back to NASA's Johnson Space Center today for a final round ofsimulations before going into quarantine in just over one week's time.

"For me,this has been a dream for an awful lot of years, so I've prepared for this,"astronaut Michael Fossum, a mission specialist andspacewalker for the STS-121 mission, told reporters. "I've been thinking aboutthis for a long time."

Fossum,who is making his first spaceflight with STS-121, said the mission is becomingmore real for his wife Melanie and their four children, and that the family hastaken time to talk about it.

"I thinkit's a lot harder on our families than it is on us when we go fly," addedLindsey, who has three children of his own with his wife Diane. "As soon as we launch, we are just working nonstop and that's all we'rethinking about. But the families are not, they're thinking about us."

NASA'spost-Flight Readiness Review press conference will air live on NASATV no earlier than 2:00 p.m. EDT (1800 GMT) on Saturday. You are invitedto follow along with the press briefing using SPACE.com'sNASATV feed, which is available by clicking here.