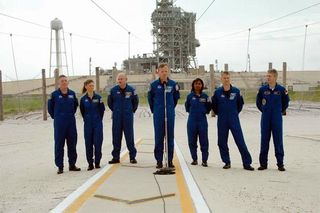 The STS-121 crew speaks to the media near slidewire baskets used in emergency launch pad evacuation while the shuttle Discovery sits atop Launch Pad 39B in the background. At the microphone is Commander Steven Lindsey. Behind him are (from left) Mission Specialists Michael Fossum and Lisa Nowak, Pilot Mark Kelly and Mission Specialists Stephanie Wilson, Piers Sellers and Thomas Reiter of Germany, who represents the European Space Agency. Image
(Image: © NASA/Kim Shiflett.)

CAPECANAVERAL, Fla. - The clock is ticking down towards a mock Thursday launch forNASA's STS-121 astronauts, who are preparing to ride the space shuttleDiscovery into orbit on July 1.

The launchdress rehearsal, a two-day training session known as a TerminalCountdown Demonstration Test (TCDT) here at NASA's Kennedy Space Center(KSC), is one of the final milestones before the STS-121 crew launches aboardDiscovery next month.

"I've beentelling the crew that I'm guaranteeing July 1 but, as I get told at home, I'mquite often wrong," STS-121 commander Steven Lindsey said Tuesday in a pressbriefing at Discovery's launch pad. "I don't really know of anything out therethat would preclude a July 1 launch."

The STS-121astronaut crew will fly NASA's second orbiter test flight since the 2003 Columbia accident. Afterlong delays and major revisionsof shuttle externaltank, the Discovery astronauts are now less than three weeks from theopening of their 19-day launch window. A specific launch date is expected to beannounced on Saturday.

"We'reexcited to be here in sight of the launch pad at last," STS-121 missionspecialist Michael Fossum said. "I won't say we're perfect, but we're as goodas we're going to get."

"The vastamount of our training is at [Johnson Space Center in Houston] in a simulator,but if you look behind me, this is no simulator," said Lindsey, referring tothe Discovery orbiter perched in launch position atop Pad 39B behind him andhis crewmates. "This event, more than any other, makes us feel like it's realand we're almost ready to go."

"Thisorbiter's been well taken care of for the last year since it landed for STS-114," Kelly said ofDiscovery. "We are very comfortable that it's in perfect condition for flight."

NASA'sSTS-114 mission launched in July 2005 on the first post-Columbia shuttleflight, a 14-day mission that ended with a successful landing at Edwards AirForce Base in California.

OnThursday, the crew will don their orange flight suits and walk out to thelaunch pad for a mock launch countdown inside the Discovery vehicle.

At leasttwo STS-121 astronauts are keeping an eye on the ongoing World Cup 2006 soccer tournamentplaying out in Germany. Germany-born Reiter and Sellers, of England, are both admitted soccer fans and are following their national teams even as they preparefor Discovery's upcoming launch.

"He's a Germany fan, I'm an England fan, and we're both backup Brazil fans," Sellers said of himself andReiter.