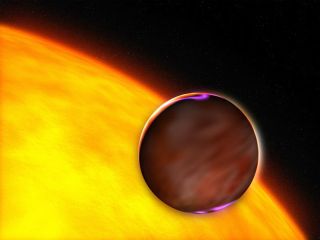 Most planets orbit in a plane that corresponds to their parent star's equator. But XO-3b orbits with a crazy tilt of 37 degrees from its star's equator. The only other known example of such an oddly angled orbit was Pluto, until its demotion to dwarf planet status. There is, however, a planet known to orbit backwards around its parent star.
(Image: © NASA. ESA, amd G. Bacon (STScI))

Three years of scouring the skies with a "homemade" telescope fashioned from commercially available parts has finally paid off for astronomer Peter McCullough.

First came the observation of the brief but telltale dimming of a sun-like star 600 light-years away, then the detection of the star's wobble indicative of an orbiting planet's presence.

Finally, McCullough's international team of professional and amateur astronomers received the official word that they had discovered a Jupiter-sized planet.

By scouring the skies with many telescopes made from relatively inexpensive equipment instead of a few large observatories, the search for extrasolar planets could pick up dramatically.

"This discovery suggests that a fleet of modest telescopes and the help of amateur astronomers can search for transiting extrasolar planets many times faster than we are now," McCullough said.

To find XO-1b, the team built their telescope, which they call the XO prototype telescope, from two commercially available 200-millimeter telephoto camera lenses. The setup, which resembles a pair of high-powered binoculars, is mounted on the summit of the Haleakala volcano in Hawaii.

The XO prototype telescope cost about $60,000, which is far less than the many millions spent on typical professional observatories.

The team scanned the sky from September 2003 to September 2005 and observed tens of thousands of bright stars. A computer sifted through the data for tiny decreases in a star's light. If a normally bright star appears slightly dimmer in one picture, it could be because a planet is passing in front of it.

Once the team identified a few dozen promising candidates, McCullough assigned four stars to amateur astronomers for further observation, including the star XO-1.

After observing XO-1 in June and July 2005, astronomers confirmed that the roughly 2 percent dips in the star's brightness are caused by a planet-sized object that eclipses the star every four days. Astronomers at the McDonald Observatory in Texas verified the object as a planet, named XO-16, and determined its mass was slightly less than that of Jupiter.

"It was a wonderful feeling because the team had worked for three years to find this one planet," McCullough said. "The discovery represents a few bytes out of nearly a terabyte of data: It's like trying to distill gold out of seawater."

This technique is called the transit method, and it allows astronomers to determine a planet's mass and size, which can be used to estimate other characteristics, such as the planet's density.

So far, of the roughly 180 extrasolar planets detected, including XO-1b, only 10 have been discovered using the transit method. Most have been spotted indirectly by noting a gravitationally-induced wobble in the host star.

There is still much to be learned about XO-1b, including whether it shares its star with other planets.

"By timing the planet's passages across the star, both amateur and professional astronomers might be lucky enough to detect the presence of another planet in the XO-1 system by its gravitational tugs on XO-1b," McCullough said. "It's even possible that such a planet could be similar to Earth."

As McCullough continues searching for other planets, he believes XO-1b is a good candidate for investigation by the Hubble and Spitzer space telescopes. Hubble could precisely measure the star's distance and the planet's size, while Spitzer might be able to provide an image of the planet based on its infrared radiation.