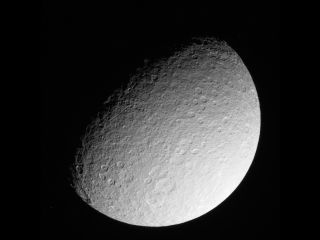 Cassini took the amazing new photos of Rhea on Saturday (March 9) during its fourth and final planned encounter with the Saturn moon. During the encounter, the probe flew within just 620 miles (997 kilometers) of Rhea, which is Saturn's second-largest satellite."Take a good, long, luxurious look at these sights from another world, as they will be the last close-ups you'll ever see of this particular moon," Cassini imaging team lead Carolyn Porco, of the Space Science Institute in Boulder, Colo., said in a statement accompanying the photos.

Rhea was discovered in 1672 by the mathematician and astronomer Giovanni Domenico Cassini, who gave his name to the NASA mission currently studying the Saturn system.

In 2010, researchers determined that the moon has a wispy atmosphere dominated by oxygen and carbon dioxide. The oxygen likely was blasted free from water ice on Rhea's surface by charged particles streaming from Saturn, scientists say, but the origin of the carbon dioxide is more mysterious.

The Cassini mission — a joint effort involving NASA, the European Space Agency and the Italian Space Agency — launched in 1997 and arrived at Saturn in 2004. It has been studying the ringed planet and its many moons ever since, and will continue to do so on an extended mission until at least 2017.