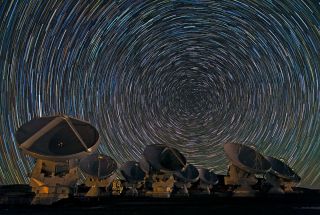 The Atacama Large Millimeter/submillimeter Array (ALMA) is the world's most powerful observatory for studying the universe at the long-wavelength millimeter and submillimeter range of light. It's designed to spot some of the most distant, ancient galaxies ever seen, and to probe the areas around young stars for planets in the process of forming.

The opening of the $1.3 billiontelescope array is being celebrated in an inauguration ceremony on Wednesday (March 13) at its observation site in Chile's Atacama desert. Here are six things you should know about the ambitious, not to mention immense, astronomy project.

ALMA combines the forces of 66 radio antennas, most almost 40 feet (12 meters) in diameter, to create images comparable to those that could be obtained with a single 46,000-foot-wide (14,000 meters) dish.

The observatory is accurate enough to discern a golf ball 9 miles (15 kilometers) away.

2) A decade to build

The telescope is a collaboration of four continents, being sponsored by countries in North America, Europe and East Asia, with the cooperation of Chile. Planning and constructing the observatory took thousands of scientists and engineers from around the world more than 10 years.

3) ALMA is one high eye on the sky

The observatory is among the highest instruments on Earth, at an altitude of 16,570 feet (5,050 meters) above sea level. Its perch high atop the Chajnantor plateau puts it above much of the Earth's atmosphere, which blurs and distorts light.

4) It's in the driest place on Earth

ALMA's location in Chile's Atacama desert, the driest place in the world, means almost every night is clear of clouds and free of light-distorting moisture. Some weather stations in the desert have never received rain, and scientists think the Atacama got no significant rainfall between 1570 and 1971. [10 Driest Places on Earth]

The surfaces of its dozens of radio dishes are almost perfect, with none deviating from an exact parabola by more than 20 micrometers (20 millionths of a meter, or about 0.00078 inches). This prevents any incoming radio waves from being lost, so that the resulting picture captures as much distant cosmic light as possible. The radio dishes, which weigh about 100 tons each, are made of ultra-stable CFRP (Carbon Fiber Reinforced Plastic) for the reflector base, with reflecting panels of rhodium-coated nickel.

6) This is one cool telescope — literally

The electronic detector called the "front end" that amplifies and converts the radio signals collected at each ALMA antenna must be kept at a chilling 4 Kelvin ( minus 452 degrees Fahrenheit, or minus 269 degrees Celsius), to prevent introducing noise to the signal.

Ultimately, the ground-breaking observatory promises to reveal many new secrets of the cosmos — not to mention some really pretty pictures.