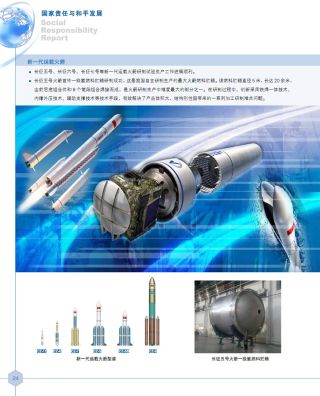 China is making progress in creating a new line of launchers for advancing its space station plans, as well as bolstering its capability to land robots — and possibly humans — on the moon.

Earlier this year, the China Aerospace Science and Technology Corporation announced it had successfully conducted a 200-second test firing with the Long March 5 rocket's 120-ton-thrust liquid oxygen (LOX) and kerosene engine. The engine is far more powerful than the 75-ton-thrust engines of the rockets used to launch China's piloted Shenzhou spacecraft.

The China Manned Space Engineering (CMSE) Office has noted that the high-performance engine is the first kind of high-pressure staged combustion cycle engine for which China has proprietary intellectual property rights. It is non-toxic, pollution-free and highly reliable, the CMSE stated, adding that the engine makes China the second country in the world, after Russia, to grasp the core technologies for a LOX/kerosene high-pressure staged combustion cycle rocket engine.

CMSE officials say the Long March 5 should make its maiden voyage in 2014. Ahead of that, several limit-determining tests will be conducted to ensure the engine's stability and reliability. [Gallery: The World's Tallest Rockets]

To support launches of the Long March 5 and other next-generation boosters — a Long March 6 and Long March 7 are also under development — China is also building a spaceport, complete with a theme park, in Hainan, an island province off the south coast.

According to Liang Xiaohong, deputy head of the China Academy of Launch Vehicle Technology, production of the 197-foot-long (60 meters) rocket’s key components will be completed within this year.

Liang told China's state-run Xinhua news agency that the Long March 5 will more than triple Chinese rockets’ carrying capacity by lofting a maximum of 25 tons to low Earth-orbit and 14 tons to geosynchronous orbit.

The successful test of the first stage of the Long March 5 earlier this year was highlighted by Gregory Kulacki, senior analyst and China project manager in the global security program of the Union of Concerned Scientists based in Cambridge, Mass.

"The date most often associated with the Long March 5 is 2014, when the new launch facility in Hainan should be completed," Kulacki said.

He added that the increased lift is critical to China’s plans to build a space station by 2020, and to the third phase of the nation's Chang’e lunar program, which aims to return lunar rock samples — collected by a robotic rover — back to China for analysis.

"Although the Long March-5 has had some technical difficulties and is behind schedule, the successful testing of the LOX engines last July makes the 2014 target date for beginning its operational use feasible," said Joan Johnson-Freese, a national security affairs professor at the U.S. Naval War College in Newport,R.I.

Johnson-Freese told SPACE.com that the Long March 5 is necessary to launch China’s space station into orbit — the culmination of its three-stage plan for human spaceflight.

China launched its robotic Tiangong 1 space laboratory in September 2011. In June of this year, a crew of three aboard the Shenzhou 9 craft docked to the lab, staying onboard for several days before returning to Earth. On the drawing boards, according to Chinese space officials, is a large space station to be in Earth orbit in the 2020 time frame. [Photos: China's First Manned Space Docking]

"While current capacity was sufficient to place the Tiangong space module into orbit, a larger space station is beyond China’s current capacity," Johnson-Freese said. "Contrary to often popular belief that a manned lunar landing is already approved and under development in China, a space station has always been the goal of their 30-year plan for human spaceflight approved in 1992, as Project 921."

Crews to the moon

Charles Vick, senior technical analyst for GlobalSecurity.org in Alexandria, Va., said that China’s buildup of a new family of boosters "implies a capability that the U.S. may find difficult on the world stage of geopolitical influence to contend with, much less compete."

Vick said that the Long March 5 offers China the capability to carry out crewed lunar circumnavigation and lunar orbit flights.

"The absence of evidence on these human lunar exploration goals does not mean something is not happening," Vick said. "It can be quite to the contrary and more often than not it should be a red flag warning that something is indeed going on that will eventually manifest itself."

"It’s interesting to note, however, that the latest space white paper from China, released on December 31, 2011, indicates an official study effort is now underway for manned lunar exploration," Cheng said.

The actual white paper language states: "China will conduct studies on the preliminary plan for a human lunar landing."

The Long March 5 seems to be part of a larger family of vehicles, Cheng said, "reflecting a fairly effective effort at amortizing the costs of developing new technologies by applying them across a family of launch vehicles. This will likely generate efficiencies in production. We have probably not seen the last of China as a competitor for providing commercial space launch."

In Cheng’s view, the Chinese are pursuing space launchwith state-owned enterprises as the preferred solution path.

"In the United States, we’re going to rely more on SpaceX, a private company, in the hopes/expectation that they will be able to fulfill launch commitments and even deliver people, while making a profit, and hopefully innovating," Cheng said. "A classic clash between two fundamentally different approaches.".

Cheng said that the concentration of major facilities on Hainan island, including the new launch site, "is probably a factor in growing Chinese assertiveness over territorial claims to the entire South China Sea."