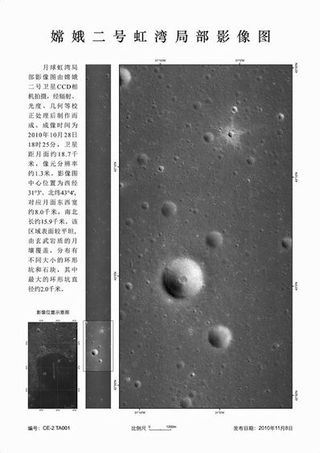 The fresh five-year plan will kick off in 2012 with the launch of two Shenzhou spaceships to dock with Tiangong 1, a prototype space station module launched in September 2011. An unmanned Shenzhou capsule accomplished China's first robotic docking in orbit in November.

At least one of the Shenzhou missions this year will carry a crew of astronauts.

Chinese officials have not disclosed a timetable for either mission, which are named Shenzhou 9 and Shenzhou 10.

China plans to make technological preparations for the construction of a 100-ton space station and initiate research to land humans on the surface of the moon.

Engineers are developing the Chang'e 3 robotic lunar lander for launch in 2013, the second phase of a three-step moon exploration effort. China successfully sent two Chang'e orbiters to the moon in 2007 and 2010, collecting sharp imagery for a high-resolution map of the lunar surface.

Controllers dispatched Chang'e 2 from lunar orbit to a position at the L2 libration point a million miles from Earth, the furthest distance any Chinese probe has ever traveled from Earth.

The third step in the robotic lunar program is to return samples to Earth.

Nigeria, Venezuela and Pakistan purchased government-owned broadcasting satellites for launch by Chinese rockets, and further craft are under construction in China for Bolivia, Laos and Belarus.

China says it will continue negotiating satellite and launch agreements with developing countries.

Another focus for Chinese space officials will be the continued deployment of the Beidou navigation system, a satellite network designed to provide positioning services independent of the U.S. Air Force's GPS program.

China activated the Beidou system Dec. 27 on a trial basis. Its 10 satellites currently provide services over the Asia-Pacific region, including most of China. The coverage zone stretches from the southern border of Russia to Australia, and from India in the west to the Pacific Ocean in the east.

Global coverage will be possible by 2020 with a constellation of 35 satellites, according to the state-run Xinhua news agency.