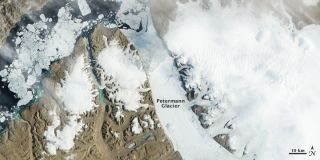 Petermann Glacier's ice shelf on July 16, 2012, just an hour or so before a giant iceberg broke off and began to float away.
(Image: © NASA)

A process more than a decade in the making reached its climactic moment this week, when a giant iceberg finally broke away from the floating end of a Greenland glacier — and a passing satellite captured the drama on camera.

On Monday, a massive iceberg larger than Manhattan was birthed from the Petermann Glacier, one of the largest in Greenland, and began to float toward the open ocean.

The 46-square-mile (120-square-kilometer) iceberg appeared to make the final break in under two hours, as images from a polar NASA satellite attest.

At approximately 6:25 a.m. local time on Monday (July 16), the massive berg still hugged the glacier's seaward edge. Just an hour and a half later, at around 8 a.m., satellite images reveal that the berg had begun to move northward along the fjord that houses it, toward the Arctic Ocean.

Scientists sifting through years-old satellite data from 2001 first noticed the rift in the glacier's floating forward edge, or ice shelf, several years ago, but it has taken until now for the island of ice to sever itself completely from the glacier that feeds it.

Although the newly-calved berg is admittedly large, it pales in comparison to its most recent predecessor.

In August 2010, a 97-square-mile (251-square-kilometer) chunk of ice broke off from the Petermann Glacier. It was the largest iceberg recorded in the Arctic since 1962.

Scientists had predicted that the most recent iceberg would break away during the warm summer months of 2012.

The Petermann Glacier wends through Greenland's ice sheet, and essentially serves as a slow-moving conveyor belt, moving ice from the middle of the ice-bound island to the sea, where it forms colossal, floating plains of ice that, from time to time, give birth to enormous icebergs.

However, these floating ice plains also buttress up the glaciers that feed them, slowing their progress into the ocean. Research has revealed that when ice shelves weaken or collapse entirely, glaciers speed up, moving more ice off of land and into the ocean and raising global sea levels.

This week's iceberg birth has shrunk the Petermann Glaciers' ice shelf significantly, according to polar scientists with the National Snow and Ice Data Center and the University of Delaware.

This article was provided by OurAmazingPlanet, a sister site of SPACE.com. Follow OurAmazingPlanet for the latest in Earth science and exploration news on Twitter @OAPlanet. We're also on Facebook & Google+.