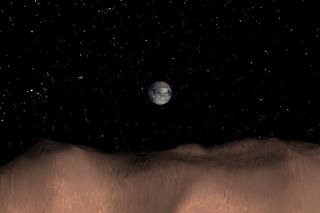 Computer-generated image depicting a view of Earth as seen from the surface of the asteroid Toutatis.
(Image: © NASA/JPL)

Earth has two moons, a group of scientists . One is that waxing and waning nightlight we all know and love. The other is a tiny asteroid, no bigger than a Smart Car, making huge doughnuts around Earth for a while before it zips off into the distance and is replaced by another.

That's the scenario posited by the scientists in a paper published Dec. 20 in the planetary science journal ICARUS. The researchers argue that there is a space rock at least 1 meter (3.3 feet) wide orbiting Earth at any given time, though it's not always the same rock.

In the scientists' theoretical model, our planet's gravity captures these asteroids as they pass near us on their way around the sun. When one is drawn in, it typically makes three irregularly shaped swings around Earth — sticking with us for about nine months — before hurtling on its way.

According to the researchers, surprisingly little attention has been paid to Earth's natural satellites other than the moon, despite the fact that they're sure to exist. "There are lots of asteroids in the solar system, so chances for the Earth to capture one at any time is, in a sense, not surprising," said co-author Jeremie Vauballion, an astronomer at the Paris Observatory in France.

The group claims that its paper is the first effort to theoretically model the orbits and sizes of Earth's temporary second moons. The researchers' results are consistent with observations of one such "temporarily-captured asteroid" that is believed to have orbited Earth for about a year starting in June 2006. The object, labeled 2006 RH120, was discovered by the Catalina Sky Survey in Arizona; estimated to be between 10 and 20 feet (3 and 6 meters) wide, it appeared to be orbiting Earth from two moon-distances away. [What Would Earth Be Like with Two Suns?]

Mikael Gravnik, a physicist at the University of Helsinki and lead author of the new paper, says 2006 RH120 was probably discovered because it was slightly larger than most of the other "temporary moons" that come traipsing through our planetary system. Most of the hobo moons are only about 1 meter wide.

"Objects of this size are too faint to be detected when being at a distance of, say, a few lunar distances from the Earth," Gravnik told Life's Little Mysteries, a sister site to SPACE.com."When coming closer in during their orbit, they are moving too fast to be detected, because the limited amount of photons is spread over too many pixels."

These limitations mean we don't currently have a way of finding our second moons. But an observatory called the Large Synoptic Survey Telescope (LSST), planned to open in Chile in 2015, could change that.

"We hope that LSST will do something about this, but dedicated programs will without doubt be even better," Vauballion said. "Statistic study is still needed to see where and how to look for them."

NASA's Spaceguard Survey tracks the paths of all near-Earth objects (NEOs) in Earth's neighborhood that are larger than 0.6 miles (1 kilometer) in diameter, but the scientists are less concerned with bodies that are too small to pose a threat to Earth — as is the case when they're just 1 meter wide.

But if our distant, noncommittal moons don't threaten Earth, and are much too dim to act as nightlights, does it matter that they're there at all?

According to astronomers, it does. Some researchers say it might be possible to go and get one of these temporary moons and bring it back to Earth for analysis.

"When found, such an asteroid will immediately raise the question whether or not we should go, and I'm ready to bet that many astronomers will argue that we definitely have to go!" Vaubaillon said in an email. "The reason is simple: What astronomers would not want to have a full and intact (unaltered by any physical process) piece of space rock? Meteorites are all altered because they go through our atmosphere. The only piece of asteroid we have comes from the Japanese Hayabusa mission (a few grams at the very most). The comet grains the Stardust mission got back from comet Wild 2 were all altered."

Clark Chapman, senior scientist at the Southwest Research Institute in Boulder, Colo., said a lot could be learned from the retrieval of a temporary satellite. "No doubt it is true that temporarily captured NEOs would be comparatively easy to get to and get back from ? it wouldn't take an especially powerful rocket, and round-trip times would be short," said Chapman, who is an expert on asteroid impact hazards.

Gravnik said, "We certainly hope that a space mission to a natural Earth satellite would someday materialize, and have actually already started a collaboration with experts in spacecraft orbital mechanics to find out how a mission from the Earth to a temporary satellite could be accomplished."