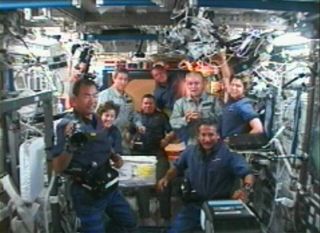 In this image released by NASA TV, the crew aboard the space shuttle Discovery and International space station pose for a picture being taken by astronaut Steve Robinson, out of view, in this view from television from the Destiny module of the international space station Thursday, July 28, 2005. The crew from left to right are Japanese astronaut Soichi Noguchi, front left, astronaut Wendy Lawrence, cosmonuat Sergei Krikalev, pilot James Kelly, astronaut Andy Thomas, astronaut John Phillips, astronauts Wendy Lawrence, and Charles Camarda. Discovery's seven astronauts will work with the two-man crew living aboard the ISS for eight days before returning to Earth. (AP Photo/NASA TV)

HOUSTON - NASA officiallyextended the flight of its first space shuttle mission since the Columbiadisaster, giving astronauts an extra day at the International Space Station(ISS) to move spare equipment and water into the orbital facility.

The space shuttle Discoverywill stay docked while its STS-114 crew cobbles together excess shuttle suppliesfor transfer into the station, mission managers said during a Saturdaybriefing.

The extra timewill allow Discovery's crew to gather a few hundred pounds of items from aroundthe spacecraft - including laptop computers, tools, pens, paper, printers andan additional 20-day supply of water - for use on the ISS since the STS-114mission may be the last shuttle flight to visit the ISS until NASA solves an externaltank foamshedding problem seen during the orbiter's July 26 launch.

During the briefing, NASAdeputy shuttle program manager Wayne Hale also said that Discovery'sheat-resistant ceramic tiles and a loose thermal blanket have been given aclean bill of health.

That clears 90 percent ofDiscovery for the return flight to Earth, with the final analyses of its wingleading edges expected Sunday to be followed a day later by aerodynamicsreports on a pair of gap fillersjutting out from between the orbiter's belly-mounted tiles, he added.

"The orbiter is performing nearlyflawlessly," Hale said. "The crew is performing in just an awesome manner...wehad an outstanding EVA."

Discovery's STS-114 flightis NASA's first shuttle mission since the loss of the seven STS-107 astronautsaboard Columbia, which broke apart over Texas on Feb. 1, 2003.