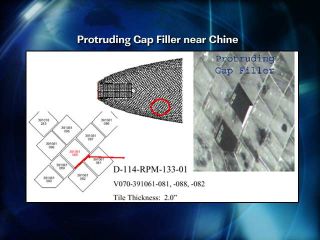 This image shows one of two gap filler protrusions found jutting out from between the heat-resistant tiles on Discovery's belly.
(Image: © NASA.)

Thatmaterial, he said, consists of additional items to the 15 tons of suppliesDiscovery ferried to the ISS.

The MMTwill meet Saturday to discuss adding the extra day, but will likely opt to goalong with the plan.

"I expectthat's what we'll do," Hale said.

Earliertoday, STS-114 mission operations representative Phil Engelauf said an engineeringteam is compilinga list of items Discovery's crew could pluck from their orbiter and leave atthe ISS as a precaution against an extended delay between Discovery's spacestation visit and the next shuttle's arrival. Among the possible items thatcould be pinned for transfer are laptop computers, unique space tools or extrawater produced by Discovery's fuel cells, he added.

TheAtlantis orbiter is next in line to launch toward the ISS - with an initialflight window opening in September - but will likely notfly until NASA address a still unresolved foam debris issue that becameabundantly clear during Discovery's Tuesdaylaunch.

During the July26 space shot, an external tank-mounted video camera caught a large chunk offoam insulation separated from the tank just over two minutes into the flight,but did not impact Discovery. Additional image analysis turned up several smallerfoam pieces that also popped free, one of which may have contacted theorbiter - inspections and impact sensors detected nothing - though it wouldhave hit with 1/10 the energy needed to pose a hazard, Hale said Thursday.

ISSofficials are also discussing the possibility of tacking on an additional taskto the third spacewalk planned for Discovery's crew.

It is for thatAug. 3 spacewalk that ISS managers are considering whether to ask Noguchi andRobinson to retrieve a motor from a thermal radiator on the station's exterior,though a formal request has not yet been made, Hale said.

"That is apotential task to be added," Hale said, adding that engineers are hoping toperform a failure analysis on the motor.

The imagerycaught two ceramic gap fillers, typically wedged between tiles that are spacedtoo far apart, poking about an inch out into space. While not due to damage, thegap filler images are the first views taken of the phenomena in orbit.Engineers typically don't find protruding gap fillers until orbiters land backon Earth.

Protrudinggap fillers disrupt the aerodynamic flow around shuttles during descent, whichcan cause higher than normal heating aft of the protrusion, Hale said.

Engineers arediscussing whether any measures are needed to address the gap fillers or other incidents,such as a damaged thermal blanket that was found during inspections.

"All ofthese things are not serious in the sense that they don't cause serious alarm,"Hale said.

The damagedarea is about three inches wide, 3/4ths of an inch long and about 1/3rdof an inch deep, but does not breach any thermal protective barriers.

"That isvery good news," Hale said. "I'm feeling very confident that this is not goingto turn out to be anything very significant."