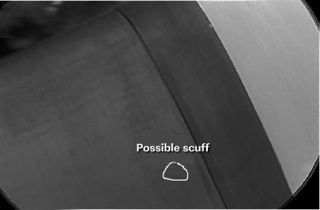 Discovery's orbital boom sensor system (OBSS) was able to pick up tiny scuffs on the reinforced carbon carbon panels of the shuttle's wing leading edges like this one shown here.
(Image: © NASA.)

HOUSTON - Theastronauts aboard the space shuttle Discovery are again scanning theirorbiter's heat shield to get a second look at slightly damaged areas seen in aprevious sweep.

The crew isusing Discovery's camera and laser-tipped orbital boom sensor system (OBSS) tostudy at least nine parts of the shuttle's thermal protection system before theend of the day. The operation is part of a six-day heat shield verificationplan, though shuttle managers and Discovery's crew have both expressed confidencethat the orbiter is fit for reentry and landing.

Two ofthose sites will be inspected in tandem with Saturday's spacewalkactivities, during which STS-114 mission specialists Soichi Noguchi and StephenRobinson will test out tile and RCC repair methods on intentionally damagedsamples in the payload bay, NASA officials said.

Thespacewalk is the first of three for Noguchi and Robinson to install a spareparts platform outside the ISS, replace one broken gyroscope and repair thepower system of among other tasks.

Today'sOBSS look at Discovery's underside will yield much more information about thetiles there than traditional, two-dimensional images. A boom-mounted laser cangenerate three-dimensional views of tiles.

"What youdon't see is depth," said John Shannon, NASA's manager of flight operations andintegration for the shuttle program, of traditional imagery Thursday. "If youhad a gouged tile, we don't think we have but if you did, you'd only see thewhite area."

Evaluatingdamage to the shuttle's heat shield is a major goal for Discovery's STS-114mission. NASA's last orbiter flight, Columbia's STS-107 mission, ended intragedy two weeks after a piece of external tank foam pierced a heat-resistantpanel on its left wing. The damage allowed hot gases into the wing duringreentry, which destroyed the orbiter on Feb. 1, 2003. Columbia's STS-107 crewdid not survive.

NASAofficials said Thursday that a smallpiece of foam may have struck Discovery, but was not large enough to be aconcern and no damage has turned up from wing-mounted sensors and the initialOBSS inspection. That foam shedding, and a larger piece which clearly missedthe orbiter, prompted NASA officials to holdoff on future shuttle flights until the problem is solved.

Meanwhile,Discovery's crew is in the middle of their fourth day in space. Robinson andNoguchi are spending the bulk of the day going through the tools they will needfor tomorrow's spacewalk.

Earliertoday, Kelly and mission specialist Wendy Lawrence installedthe Raffaello cargo pod at a port along the station's Unity module. That cargoshipment is expected to be opened at about 10:49 a.m. EDT (1439 GMT).