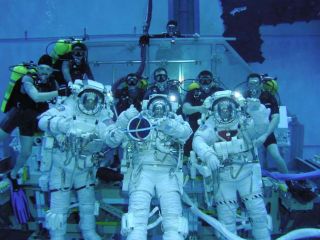 From left are: STS-114 mission spacewalkers Soichi Noguchi, Stephen Robinson and intravehicular activity crewmember Andrew Thomas during an EVA training session at the Neutral Buoyancy Laboratory at JSC. The SCUBA divers participated in the dive to assist the astronauts.
(Image: © NASA/JSC.)

NASA's nextspace shuttle mission, the first to fly since the Columbia accident, has been along time coming for three astronauts set to conduct the flight's spacewalks.

As thefirst crewmember assigned to NASA's STS-114 mission aboard the Discovery orbiter,Japanese astronaut Soichi Noguchi, lead spacewalker for the flight, has spentthe longest time waiting for his space shuttle - since 2001.

"This hasbeen a really exciting four years," Noguchi told reporters this month. "I feelhonored to be part of this crew and this is a great achievement of the U.S. space program in bringing the shuttle back to life."

"They'revery well trained," Thomas said of his crewmates in a preflight interview.

The shuttleDiscovery is slated to carry Noguchi, Robinson and Thomas spaceward no earlierthan May 22 as NASA's first return to flight mission. The mission is flyingwith several orbiter modifications as a direct response to the 2003 loss of thespace shuttle Columbia and its seven-astronaut crew, which broke up duringreentry. Investigators later found that damage to Columbia's thermal protectiveskin, caused at launch by debris from the shuttle's external tank, led to theshuttle's destruction.

"It's beena great learning process," said Noguchi, an aeronautical engineer by training, ofhis preparation for STS-114's return to flight mission. "And not just for mebut also for JAXA, which is heavily involved with the space station, in orderto learn how NASA has evolved from the accident so that we can also prepare forsuch scenarios."

Togetherwith Robinson, Thomas and other STS-114 crewmembers, Noguchi has conducted morethan 60 simulated spacewalks at NASA's Neutral Buoyancy Laboratory, where amockup of the shuttle payload bay and space station sit at the bottom of animmense pool.

"We'venever had the same thing twice," Noguchi said. "So it's never been a boringtime."

"Hopefully,everything works as advertised," Noguchi said, adding that it will be thesecond spacewalk that is likely to be the most challenging. "EVA 2, with theCMG repair, is actually the most difficult task because it requires a lot ofcoordination from the two EVA astronauts, the one intravehicular crewmember,that's Andy Thomas, and two robotic arm operators."

Even beforerocketing into space on his first flight, Noguchi is already looking toward hisnext - hopefully longer - orbital trip.

"My nextgoal after flying this mission is a long-duration flight, so I can play withthe Kibo hardware," Noguchi said, referring to the JAXA experiment module forthe ISS. "That is my future home."

Finallystepping out into black space after countless hours underwater is a relief thatRobinson has his eyes set on.

Mostspacewalk crews practice their EVAs six or seven times per mission, not the 60plus for STS-114, NASA officials said.

"I've beenunderwater so much, I am so ready to go outside," Robinson said. "What's reallycool about spacewalks is, that with all this technology...it requires humanhands, eyeballs and brains to make it all work together and that really appealsto me."

Robinson, 49,has been part of NASA since 1975, when he joined NASA's Ames Research Center as a university student only to sign on as a research scientist four yearslater. Selected as an astronaut in 1994, he has flown aboard two shuttleflights during the STS-85 and STS-95 missions and also served as a backupcrewmember for Expedition Four to the ISS.

In additionto supporting the ISS, Robinson will test an experimental material known as NOAX,a sort of black putty that bubbles before fixing in place, for itseffectiveness filling in cracks in carbon carbon panels.

"It's notjust what we're doing outside, it's this whole mission," Robinson said, addingthat the orbital boom and thermal protection inspection activities are vital. "Whatwe learn here is really essential...because while this is going to be the safestmission ever flown, the next one after us should be safer."

WhileRobinson admits that the three STS-114 spacewalks are full of activities, hedoesn't believe they are too busy. So much, in fact, that the astronaut hopesto find some time to fill a shutterbug itch.

"One of thethings I like to do is take stereo photographs, so I'm going to try to takesome of the shuttle on EVA," he said.

And, ofcourse, riding up with Robinson will be his trusty Tom Corbett, Space Cadetlunchbox - from the 1950s television show - which he has used to storebandaids, muscle creams and other spacewalks supplies throughout the years oftraining.

"Some ofthe guys who played those roles in Tom Corbett are still out there and they sawme with the lunchbox and sent me pictures of themselves," Robinson said, addingthat one image depicted an actor in a lavender EVA suit labeled 'Spaceman'sLuck.' "So they wished our crew spaceman's luck."

WhileThomas's role during the three STS-114 spacewalks is an inside job, he has noshortage of work prepared for his flight. The Adelaide, Australia native, the most accomplished space flyer of the EVA team, will also serve as therobotics lead during the mission and will conduct the vital tests of Discovery'snew sensor-tipped orbital boom that will scan sensitive orbiter areas fordamage.

"We'veadded a lot of additional work during this mission," said Thomas, 53, during aninterview. "And that is all the inspection and survey work of the orbiter,using the boom and robotic arm...and al of that is on Flight Day 2."

Thomasbegan his career as a research scientist before being accepted into NASA'sastronaut ranks in 1993 and riding three space shuttles into orbit. He flewaboard the Endeavour orbiter during the STS-77 mission 1996, and aboardDiscovery twice - first during 1998's STS-89 flight to the Mir space stationwhere he served as flight engineer, then during ISS-bound STS-102 spaceflight.It was on that last flight that Thomas spent 6.5 hours working in space toinstall new components to station's exterior.

"I wouldhave liked to been on [these spacewalks]," Thomas said. "But these guys havebeen training for so long...We've rehearsed these EVAs so many times that I'mpretty confident about them."

Thomas saidthat the loss of the Columbia orbiter and STS-107 astronauts has not affectedhis preparations for STS-114.

"I don'tthink that the preparations for me personally are that much different from pastflights," he said. "The reality is that this flight is probably the safest I'veever flown."