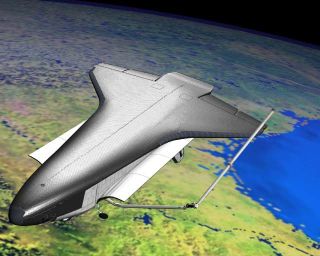 This computer-generated view of the bottom of the Space Shuttle Discovery in flight shows the orbiter's robotic arm - orbital boom attached - in one of the wing leading edge survey points.
(Image: © NASA/JSC.)

When NASA'sDiscovery orbiter rockets into space this year as the agency's first shuttle flightin more than two years, the astronauts aboard will carry a bevy of tools andtechniques to ensure their spacecraft is safe.

In additionto a redesigned, camera-laden externalfuel tank, the seven astronauts assigned to Discovery's STS-114 mission aretoting with them new instruments to repair the shuttle's thermal protectionsystem and a sensor-capped extension to the orbiter's robotic arm.

"We'll knowthe health of our vehicle," said STS-114 pilot Jim Kelly during a recentspacewalk training sessionat in NASA's Neutral Buoyancy Laboratory tank at Johnson Space Center (JSC). "Oncewe have that, we can make intelligent decisions if something were to happen."

Discoveryis currently set to launch no earlier than May 15 of this year to deliver toolsand supplies to the orbiting International Space Station and test its own newequipment. The planned space shot is NASA's first shuttle launch since the lossof the Columbia orbiter, which broke up during reentry, killing its sevenastronaut crew on Feb. 1, 2003.

"Tile and[RCC] crack repair is difficult because the tiles are fragile," Robinson said aftercompleting the spacewalk training session. "And if they're damaged, they aremore fragile."

A graysubstance, the wash, is loaded into a handheld applicator and squeezed througha foam mesh to be dabbed over a damaged tile, explained Mark Dub, an extravehicular(EVA) tool engineer at JSC. A layer ranging from one-eighth to one-twenty fifthof an inch can be applied to tiles with damage reaching down to about half thedepth of a standard tile, he added.

WhileNoguchi focuses on shuttle tiles during one of three STS-114 spacewalks,Robinson will turn his attention to testing a technique to repair small cracksin panels of reinforced carbon-carbon (RCC).

RCC panelsline the leading edge of shuttle wings and are designed to bear the highesttemperatures experienced during shuttle reentry. A hole punched by externaltank foam into one of Columbia's leading edge RCC panels at launch allowed hotgases to enter the wing during reentry and destroy the orbiter.

Discoveryis also expected to carry some additional tools for other repairtechniques, even if they're left stowed during the flight.

"It's like havingan ejection seat in a jet," Robinson said of the tools and techniques that aren'tplanned for testing during STS-114 spacewalks. "You don't plan to use it, butit's not a bad idea to have it along."

Among othertools may be an array of overlay panels made of a material called carbonsilicon carbide that can be affixed over damaged shuttle tiles with screws.

NASAengineer Kevin Wells, EVA tools project leader for overlay repair, told SPACE.com that while it is relativelyeasy to install screws in shuttle tiles - they can be twisted using just afinger - astronauts would have to use special tool to measure torque to ensurethe screw does not strip away needed material.

A secondset of patches, made of material similar to the overlays but a bit sterner, mayalso fly during Discovery's mission. The patches are designed to fit over ahole in a shuttle RCC panel, though researchers are still conducting ground teststo make sure hot gases don't burn away or seep through patch edges.

"The gap[between patch and panel] is the predominant path for failure," said Frank Lin,NASA's project manager for RCC repair. "We could seal that gap with the NOAXmaterial."

One lastand potentially problematic repair method includes filling severely damagedtiles with a pink, ablative goo-like substance called STA-54, which is squirtedinto place from a backpack-mounted tank. The goo is actually made of twoseparate materials that are mixed together as they pass through a handhelddevice. STA-54 is designed to rise like bread as it heats up during reentry,with outer surface ablating away and new material swelling up to take itsplace, NASA engineers said.

Tests invacuum chambers and during zero gravity flights aboard NASA's KC-135 aircrafthave found that the STA-54 materials is prone to bubbling as it cures, whichcould diminish its effectiveness if left unresolved.

The largestaddition to Discovery's toolbox is a 50-foot (15-meter) boomthat can be attached to end of the orbiter's robotic arm in orbit, nearlydoubling its length.

A suite ofsensors, including cameras and a laser ranging system, should sit on the end ofthe boom and allow the Discovery crew to scan the orbiter's underbelly forcracked or broken tiles and other damage. Should that senor package fail, aplatform can be attached to the boom's end in order for an astronaut to make avisual inspection and take digital images.

"We do haveto be prepared for the possible failure of the sensor package," Noguchi said.

NASAengineers said STS-114 astronauts have been training to perform a maneuver thatrelies solely on the robotic arm, in which the manipulator will latch on theInternational Space Station and turn the shuttle until its tiled belly is in positionfor observation or repair.