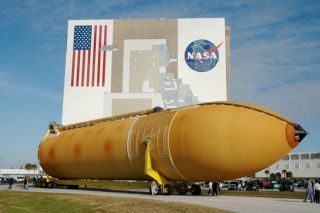 NASA marked a major milestone in its space shuttle return-to-flight efforts today with the morning rollout of a redesigned fuel tank at Kennedy Space Center (KSC).

The arrival of the external tank puts all of the major shuttle flight components - orbiter, solid rocket boosters and the tank - at NASA's KSC spaceport and brings the agency a step closer to its first launch since the loss of Columbia and its crew.

"Right now, I think we have all the elements we need to put this first flight together," shuttle program manager Bill Parsons told reporters during a press briefing today.

NASA's three remaining space shuttles have been grounded since the Feb. 1, 2003 loss of Columbia, which broke up over Texas during reentry killing the seven astronauts aboard. During the launch of that flight, a chunk of foam insulation broke off from Columbia's external tank and gouged a hole in the orbiter's left wing, which allowed hot gases in during reentry.

But the new fuel tank, dubbed External Tank 120 (ET 120), has been redesigned to avoid that type of foam shedding. Foam in one potential danger area, a bipod fitting that connected the tank to the orbiter, has been replaced with heaters. The largest pieces of foam to shake loose during the first return-to-flight launch should be no larger than a big marshmallow, NASA officials said.

"We have done significant testing to assure ourselves that we will not lose foam [pieces] that exceeds the ability of the orbiter to take," said Sandy Coleman, external tank project manager for NASA, during the briefing. "This is the safest, most reliable tank we have ever built."

After rollout this morning, the new external tank was placed in the large Vehicle Assembly Building where it will be mated to two solid rocket boosters next month. In March, the tank-booster assembly is set to be attached to the Discovery space shuttle, which NASA plans to launch with the crew of STS-114 no earlier than May 2005.

"This is the first milestone, but it's one of many to be accomplished over the next few months," said Michael Kostelnik, NASA's deputy associate administrator for the shuttle and space station programs, of the fuel tank during today's briefing. "It's been a tough few years and the lessons in loss of Columbia were hard-learned."

Kostelnik said restoring the space shuttle to flight status is vital for NASA to support the human crews aboard the International Space Station (ISS), whose capabilities have suffered as a result of two years without a shuttle visit.

The recent food shortage and Jan. 1 malfunction of the station's Elektron oxygen generator during the current ISS mission, Expedition 10, are signs of that stress, he added.

The value of a human crew aboard the ISS was apparent today when Expedition 10 flight engineer Salizhan Sharipov successfully repaired the non-functioning Elektron oxygen generator using procedures developed by Russian engineers on the ground.

"There is not a lot of margin for what we do in space and small things make a big difference," Kostelnik said. "We can fly the station safely unmanned, but we can't fix things that break."