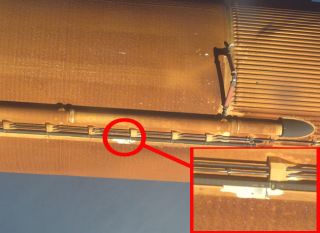 In this still image, the area of missing foam on the space shuttle Discovery's external tank is indicated by the red-ringed light spot centered just below the liquid oxygen feedline. Image
(Image: © NASA)

HOUSTON - As the day winds down for theastronaut crew of the space shuttle Discovery, the night promises to be busyfor flight controllers and engineers back on Earth.

Discovery'searly morning rendezvous and docking at the International Space Station (ISS)today generated a wealth of photographs of the orbiter's tile-coveredundercarriage, which imaging specialists are now poring through to study theshuttle's thermal protection system. But so far, mission managers said, theorbiter looks fit to fly back to Earth.

"Theinitial report is that it looks extremely good and we have nothing to worryabout on Discovery," said John Shannon, NASA's flight operations andintegration manager for the space shuttle program. "But...it is a six-dayprocess."

Engineers hard at work developing acomprehensive picture of the shuttles health are in the third day of a six-dayevaluation, and the images taken by the ISS crew will only add to that, Shannonsaid during a mission status briefing.

"We got an excellent view," saidPaul Hill, the mission's lead flight director, during the briefing. "It lookstremendous."

"It was nominal by all meaning ofthe word," Hill said of the shuttle-ISS rendezvous. "Like itwas right out of a textbook."

The new photographs, which were downlinked to the ground earlier today, will aid shuttleengineers working to understand a chipped heat-resistant tile near Discovery'snose landing gear doors seen in other images, NASA officials said. They willalso help robotics specialists work up guidelines for Discovery's STS-114 crewto follow should mission managers decide to use the shuttle's robot arm andorbital inspection boom to take second looks at specific regions of theorbiter.

"Our robotics team has alreadystarted working on a few trajectories based on the areas of interest that havebeen discussed," Hill said.

In a Wednesday press conference,deputy shuttle program manager Wayne Hale pointed out two potential areas onDiscovery's belly that could be candidates for follow-up boom inspections. Inaddition to the chipped tile, Hale also identified an "area of interest"further back on the orbiter's belly.

Shannon said shuttle engineers are alsogoing over images of Discovery's external tank, which shed much more foaminsulation than expected during the orbiter's Tuesday launch. Imagingspecialists estimate that the most visible chunk of foam insulation that poppedoff a protective ramp on Discovery's external tank - caught on film by a videocamera attached to the tank - weighs about 0.9 pounds, though there were threeother incidents of smaller foam loss, he added.

The foam loss from Discovery'sexternal tank prompted shuttle program managers to say late Wednesday thatuntil they understand how the foam popped loose, future orbiter flights wouldlikely stay on the ground. The large, 0.9-pound chunk of foam did not strikeDiscovery, they added.

It was a chunk of external foam thatdoomed the space shuttle Columbiain 2003 after it struck the orbiter's left wing leading edge and punchedthrough a vital heat-resistant panel. Columbiabroke apart on Feb. 1, 2003 after hot atmospheric gases penetrated the holegouged in its wing by the foam. Its seven-astronaut crew did not survive.

Discovery's STS-114 mission, morethan two years in the making, was expected to prove NASA's modifications toshuttle external tanks would safeguard shuttles from damage. A follow-upmission, STS-121 aboard Atlantis, is poised to roll out to the launch pad atNASA's KennedySpaceCenterin Cape Canaveral, Florida.

Shannon said that, while they aredisappointed that external tank foam is still a launch hazard, shuttle workers,engineers and managers are not backing down from the problem.

"No one is folding their tents, no oneis down in the mouth," Shannonsaid. "We have the data, and we're looking at it."

Meanwhile, in space the Discoverycrew has been sent e-mails and data packages regarding the ongoing foam andtile investigations.

After docking today, the joint shuttle-ISScrew used the robotic arms aboard both the space station and Discovery to movethe orbiter's inspection boom off clear of both spacecraft in order to free uproom for tomorrow's installation of the Raffaellocargo module at orbital module.