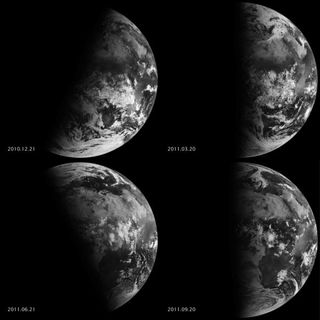 Today is the first day of fall, also known as the fall equinox. — and a new amazing animation released by NASA today shows just how the equinoxes and solstices look from the perspective of space.

Around 6 a.m. local time each day, the sun, Earth, and any satellite that follows a geosynchronous orbit form a right angle. This alignment offers the satellite a nadir (or straight-down) view of the Earth's terminator, the line where the shadows of nightfall meet the sunlight of dusk and dawn. The shape of this line between night and day varies with Earth's seasons, during which the length of the day changes. [See NASA's equinox video from space]

The Spinning Enhanced Visible and Infrared Imager (SEVIRI) on EUMETSAT's Meteosat-9 captured these four views of the day-night terminator on the solstice or equinox that marks the beginning of each season: the winter solstice on Dec. 21, 2010; the spring equinox on March 20, 2011; the summer solstice on June 21, 2011, and the fall equinox on Sept. 20, 2011. Each image was taken at 6:12 a.m. local time.

On March 20 and Sept. 20, the terminator is a straight north-south line, and the sun is said to sit directly above the equator. The term "equinox" that is used to mark the beginning of spring and fall refers to the equal lengths of day and night on these dates.

On Dec. 21, the sun resides directly over the Tropic of Capricorn (about 23 degrees south latitude) when viewed from the ground, and sunlight spreads over more of the Southern Hemisphere, where it is summer. On June 21, the sun sits above the Tropic of Cancer (about 23 degrees north latitude), spreading more sunlight in the north and turning the tables on the south. The bulge of our spherical Earth blocks sunlight from the far hemisphere at the solstices; that same curvature allows the sun's rays to spread over more area near the top and bottom of the globe.

Of course, it is not the sun that is moving north or south through the seasons, but a change in the orientation and angles between the Earth and the sun. The axis of the Earth is tilted 23.5 degrees relative to the Sun and the ecliptic plane (the plane of Earth's orbit around the sun). The axis is tilted away from the sun at the December solstice and toward the sun at the June solstice, spreading more and less light on each hemisphere. At the equinoxes, the tilt is at a right angle to the Sun and the light is spread evenly.

This story was provided by OurAmazingPlanet, sister site to SPACE.com. Follow OurAmazingPlanet for the latest in Earth science and exploration news on Twitter @OAPlanet and on Facebook.