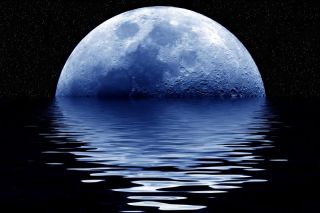 A "blue moon" isn't really blue, as this artist rendering suggests. The moon can appear somewhat blue if there's been a major volcanic eruption that put tons of particles in the air, but otherwise blue moons refer to multiple full moons in certain time frames.
(Image: © Dreamstime)

The full moon of November arrives on Sunday and will bring with it a cosmic addition: It will also be a so-called "blue moon."

"But wait a minute," you might ask. "Isn’t a 'blue moon' defined as the second full moon that occurs during a calendar month? Sunday’s full moon falls on Nov. 21 and it will be the only full moon in November 2010. So how can it be a 'blue' moon?" [Related: When is the next blue moon?]

Indeed, November's full moon is blue moon – but only if we follow a rule that's now somewhat obscure.

In fact, the current "two- full moons in one month" rule has superseded an older rule that would allow us to call Sunday’s moon "blue." To be clear, the moon does not actually appear a blue color during a blue moon, it has to do with lunar mechanics.

Well, as the late Paul Harvey used to say — here now, is the rest of the story:

Back in the July 1943 issue of Sky & Telescope magazine, in a question and answer column written by Lawrence J. Lafleur, there was a reference made to the term "blue moon."  [Gallery - Full Moon Fever]

On the almanac page for August 1937, the calendrical meaning for the term "blue moon" was given.

That explanation said that the moon "… usually comes full twelve times in a year, three times for each season."

Occasionally, however, there will come a year when there are 13 full moons during a year, not the usual 12. The almanac explanation continued:

"This was considered a very unfortunate circumstance, especially by the monks who had charge of the calendar of thirteen months for that year, and it upset the regular arrangement of church festivals. For this reason thirteen came to be considered an unlucky number."

And with that extra full moon, it also meant that one of the four seasons would contain four full moons instead of the usual three.

"There are seven Blue Moons in a Lunar Cycle of nineteen years," continued the almanac, ending on the comment that, "In olden times the almanac makers had much difficulty calculating the occurrence of the Blue Moon and this uncertainty gave rise to the expression 'Once in a Blue Moon.'"

But while LaFleur quoted the almanac’s account, he made one very important omission: He never specified the date for this particular blue moon.

But when a particular season has four moons, the third was apparently called a blue moon so that the fourth and final one can continue to be called the late moon.

So where did we get the "two full moons in a month rule" that is so popular today?

Once again, we must turn to the pages of Sky & Telescope.

This time, on page 3 of the March 1946 issue, James Hugh Pruett wrote an article, "Once in a Blue Moon," in which he made a reference to the term "blue moon" and referenced LaFleur’s article from 1943.

But because Pruett had no specific full moon date for 1937 to fall back on, his interpretation of the ruling given by the Maine Farmers’ Almanac was highly subjective. Pruett ultimately came to this conclusion:

"Seven times in 19 years there were – and still are – 13 full moons in a year. This gives 11 months with one full moon each and one with two. This second in a month, so I interpret it, was called Blue Moon."

How unfortunate that Pruett did not have a copy of that 1937 almanac at hand, or else he would have almost certainly noticed that his "two full moons in a single month assumption" would have been totally wrong.

For the blue moon date of Aug. 21 was most definitely not the second full moon that month!

Pruett’s 1946 explanation was, of course, the wrong interpretation and it might have been completely forgotten were it not for Deborah Byrd who used it on her popular radio program, "StarDate" on Jan. 31, 1980.

We could almost say that in the aftermath of her radio show, the incorrect blue moon rule "went viral" — or at least the '80s equivalent of it.

Over the next decade, this new blue moon definition started appearing in diverse places, such as the World Almanac for Kids and the board game Trivial Pursuit.

I must confess here, that even I was involved in helping to perpetuate the new version of the blue moon phenomenon. Nearly 30 years ago, in the Dec. 1, 1982 edition of The New York Times, I made reference to it in that newspaper’s "New York Day by Day" column.

And by 1988, the new definition started receiving international press coverage.

Meanwhile, the original Maine Farmers’ Almanac rule had been all but forgotten.

Playing by the (old) rules

Now, let’s come back to this Sunday’s full moon.

Under the old Almanac rule, this would technically be a blue moon. In the autumn season of 2010, there are four full moons:

But the moon turns full at 3:13 a.m. EST (0813 UT). That’s 15 hours and 25 minutes before the solstice occurs. So the Dec. 21 full moon occurs during the waning hours of fall and qualifies as the fourth full moon of the season.

This means that under the original Maine Almanac rule – the one promoted by Lafleur and later misinterpreted by Pruett – the third full moon of the 2010 fall season on Nov. 21 would be a blue moon.

So what Blue Moon definition tickles your fancy? Is it the second full moon in a calendar month, or (as is the case on Sunday) the third full moon in a season with four?

Maybe it’s both. The final decision is solely up to you.

Sunday’s full moon will look no different than any other full moon. But the moon can change color in certain conditions.

After forest fires or volcanic eruptions, the moon can appear to take on a bluish or even lavender hue. Soot and ash particles, deposited high in the Earth's atmosphere, can sometimes make the moon appear bluish.

In the aftermath of the massive eruption of Mount Pinatubo in the Philippines in June 1991, there were reports of blue moons (and even blue suns) worldwide.

We could even call the next full moon (on Dec. 21) a "red moon," but for a different reason: On that day there will be a total eclipse of the moon and, for a short while, the moon will actually glow with a ruddy reddish hue.

More on that special event in the days to come here at SPACE.com, so stay tuned!