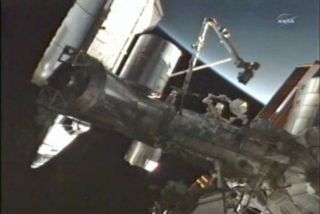 HOUSTON — After a busy week in orbit, the astronauts on shuttle Atlantis will enjoy some much-deserved time off along with some good food and a song from the band R.E.M. today (July 14).

The four shuttle flyers plan to spend their half-day off relaxing and soaking in the spectacular views of the Earth from space. Later, they'll dig into a special "All-American" meal with their crewmates on the International Space Station, NASA officials said.

Shuttle commander Chris Ferguson, pilot Doug Hurley, and mission specialists Sandra Magnus and Rex Walheim launched toward the International Space Station on July 8, and have been hard at work since. NASA roused the crew today at 1:29 a.m. EDT (0529 GMT) with a very special astronaut wakeup song: R.E.M.'s "Man on the Moon," including a special message from lead vocalist Michael Stipe.

"Good morning, Atlantis. This is Michael Stipe from R.E.M.," he said in a recorded message. "We wish you much success on your mission and thank all the women and men at NASA who have worked on shuttle for three decades. From Earth, a very good morning to you." [Astronaut Rock: NASA's Final Shuttle Wakeup Songs]

"Good morning, Houston, and all we can say up here is, wow," shuttle commander Chris Ferguson replied. "We would like to thank Mr. Michael Stipe for sending up that wonderful message and that great song. I know a lot of us up here have been listening to R.E.M. for a long, long time. It's some of the greatest music and also reminds us of the moon landing next week, the anniversary, and we echo his sentiments to thank all the great people who've worked on this wonderful space shuttle. We're ready for another day in space."

Between unpacking the massive amount of cargo brought up by Atlantis and helping two station astronauts successfully complete the final spacewalk of the shuttle era on Tuesday (July 12), Atlantis' crew has kept up with a demanding schedule.

In the morning, the astronauts will resume unpacking a massive space locker, known as the Raffaello module, which contained about 9,500 pounds (4,300 kilograms) of supplies, spare parts, food and clothing at the time of Atlantis' launch.

The crewmembers will also participate in a series of live interviews before the start of their off-duty time.

The shuttle astronauts spent most of the day yesterday (July 13) unloading the cargo carrier, and will continue to do so for the remainder of the mission. Extra supplies that were brought up on Atlantis' mid-deck will also be moved onto the station.

"It's very cluttered in the [Raffaello] module," space station flight director Chris Edelen said in a news briefing yesterday, comparing it to a house on moving day. "It's a controlled chaos."

All that heavy lifting will likely help the astronauts work up an appetite, and just in time for a special meal planned for today.

The shuttle astronauts and their station counterparts are set to dig into an "All-American" feast together, and they've even invited the public to take part in their "virtual dinner." [Space  Food Photos: What Astronauts Eat]

The meal will begin with crackers, brie cheese and sausage. For the main course, the international group of spaceflyers will share grilled chicken, barbecue brisket, baked beans and southwestern corn. They'll polish all this off with a classic American dessert: apple pie.

NASA shared its recipes with the public and invited people to share in today's space dining experience. Some members of Mission Control here at the Johnson Space Center are hoping to do the same.

"If they are having a virtual dinner, I do hope they have a downlink [video]," Edelen said. "Everyone will bring their food to the party like any good potluck meal. Yeah, hopefully we'll take part in that."

Atlantis is midway through a 13-day mission to the International Space Station. The shuttle is scheduled to land at NASA's Kennedy Space Center in Florida on July 21.