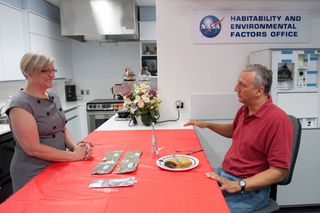 Vickie Kloeris (left), NASA food scientist and manager of the Space Food Systems Laboratory at the Johnson Space Center, and astronaut Mike Massimino discuss the items on the special American meal. Massimino served as a taste tester for the space feast.
(Image: © NASA)

If you've ever wanted to dine like a space cadet, you're about to get your chance. NASA has invited the public to cook the same meal that real-life astronauts on shuttle Atlantis will eat this week, and then share a "virtual dinner" with the crew.

On the menu in space will be grilled chicken, barbecue brisket, baked beans and southwestern corn. NASA is offering up its recipes so folks at home can create the same "All-American" feast the astronauts will eat.

The virtual dinner is set for Thursday (July 14). It will start with crackers, brie cheese and sausage, and then move on to the entrees. The gustatory delights finish off with apple pie. [9 Weird Things That Flew On NASA's Shuttles]

"Since the crew is launching in July, we thought it would be fun to have a typical summer meal often enjoyed in our backyards with friends and family," Michele Perchonok, NASA food scientist and manager of the shuttle food system, said in a statement.

However, while your food at home can be served fresh out of the oven, the spaceflyers will have to make do with meals that include freeze-dried items and thermostabilized foods, which means they've been processed with heat to destroy microorganisms and enzymes that can spoil the food.

But on the whole, space food has come a long way since Tang and freeze-dried ice cream. Shuttle astronauts now enjoy about 180 different types of food and beverages, including scrambled eggs, shrimp cocktail, and even international foods like sushi and sweet and sour chicken.

The shuttle Atlantis is currently flying the 135th and last mission of NASA's three-decades long space shuttle program. Four astronauts launched aboard the shuttle on July 8, and have now joined six fellow spaceflyers on the International Space Station. [Stunning Photos of Last Shuttle Launch From Above]

The shuttle is on a 13-day mission to deliver a final haul of spare parts to the orbiting outpost, before it and its two sister orbiters retire to museums.