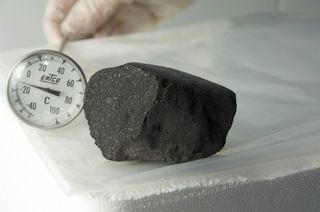 A fraction of the meteorite that landed in the Tagish Lake area in 2000.
(Image: © Michael Holly, Creative Services, University of Alberta)

The chemical building blocks that make life possible on Earth may have aged to perfection in asteroids, according to a new study.

The research, an analysis of a meteorite that fell on a frozen Canadian lake in 2000, reveals a surprisingly large variation in the organic chemicals found among different chunks of the meteorite. The results suggest the emergence of life on Earth may have depended on a "Goldilocks" situation in asteroids in the few million years after the solar system formed, said study researcher Christopher Herd of the University of Alberta.

"Not too hot, not too cold, just right," Herd told LiveScience. "And not too much water alteration and not too little… If you take that material and deliver it to the early Earth, then you deliver what you need for life." [7 Theories on the Origin of Life]

Other past research has suggested comets were the objects that delivered life's ingredients to Earth. (These giant chunks of ice, along with rocky asteroids, are thought to be leftovers from the formation of our solar system.)

Scientists believe that meteorites landing on early Earth may have seeded the new planet with the chemicals necessary to make life, including sugars and the amino acids that build proteins. These meteorites would likely break off of asteroid parent bodies, and so factors such as temperature and water levels in the asteroid could influence the chemicals that are formed within the meteorite. [Read: 5 Reasons to Care About Asteroids]

In 2006, Herd led a successful effort to purchase what is left of a large, 123,000-pound (56 metric tons) meteoroid that exploded over southwestern Canada's Tagish Lake on Jan. 18, 2000. The vast majority of the meteorite evaporated in an enormous explosion in the atmosphere over the lake, but collectors managed to retrieve about 22 pounds (10 kg) of meteorite fragments in the days after the event. The fragments were never touched by hand, and they've never been heated above freezing, preserving the organic compounds inside.

As he was documenting the meteorite haul, Herd noticed that some fragments looked very different from others.

"Some of them looked really dark, and they shed a residue of fine black dust," he said. "Others looked more salt-and-pepper, and they looked more coherent. So I wondered why there was this variation."

He chose four fragments covering the range of appearances for chemical analysis and found that there was more to the differences than met the naked eye. [See a picture of the meteorite]

"What we've shown is that there is a huge variation, a surprisingly large variation, especially in the organic matter that we see just among these four specimens," Herd said.

Most notable, Herd said, were differences in the types of amino acids and monocarboxylic acids among all four specimens (the latter compounds an important component in cell walls, he said).

Herd and his colleagues suspect that the differences stem from the way water percolated on the meteorite's parent asteroid about 4.6 billion years ago when the solar system was forming. People have theorized about the influence of water on the chemistry of asteroids, he said, but this is the first time anyone has seen these sorts of chemical variations on one meteorite.

"The next step is to go through and see if we've captured the full range of variation, and then go in and do some more sophisticated work" on the compounds found, Herd said.

The findings could shed light on how important interstellar geology may have been to the rise of life on Earth, Herd said.

"It means that what you'd get delivered to the surface of the Earth actually depends on what is going on on the asteroid," he said.

Herd and his colleagues reported their results today (June 9) in the journal Science.

This story was provided by LiveScience, a sister site of SPACE.com. You can follow LiveScience senior writer Stephanie Pappas on Twitter @sipappas.