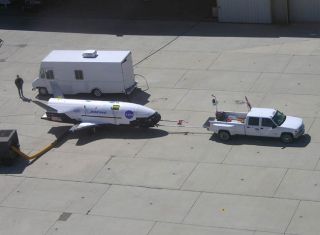 Unpiloted X-37 reentry test vehicle has been brought to Mojave, California spaceport for future drop testing. The project is a NASA, Boeing and Defense Advanced Research Projects Agency (DARPA) effort. The craft is to be released by the White Knight, built for air-lifting and deploying SpaceShipOne.
(Image: © Alan Radecki.)

The innovative carrier plane used to air launch SpaceShipOnehas a new mission. At the Mojave, Californiainland spaceport, the White Knight mothership has been involved in fit andhigh-speed taxi checks with a new passenger - the X-37, an unpiloted, reusablespaceplane.

Designed by ScaledComposites of Mojave, California,the White Knight was utilized to haul SpaceShipOne to altitude and thenreleased the piloted rocketplane for its record-setting suborbital treks,including the snagging of the high-stakes $10 million Ansari X Prize last year.

In its new role, the White Knight is being readied to carry the Boeing, Defense Advanced Research Projects Agency (DARPA), NASA-supported vehicle skyward. No official word yet on when the twosome will take to the air, or what is the timeframe for the first drop test of the X-37 using the White Knight.

TheX-37 has been billed as an unpiloted, autonomously operated vehicle designed toconduct on-orbit operations and collect test data in the Mach 25 (reentry)region of flight.

TheBoeing-built X-37 is geared to be a test bed for airframe, propulsion andoperation technologies designed to make space transportation and operationssignificantly more affordable.

Accordingto a Boeing fact sheet on the craft, the X-37 project is exploring potentialnew commercial and military reusable space vehicle market applications, be theyon-orbit satellite repair to the next-generation of totally reusable launchvehicles.

The Approach and LandingTest Vehicle (ALTV) has been at the Mojave airport since mid-April,explained Jan Walker, a DARPA spokesperson. "The first taxi test occurredearlier this month. In addition to the taxi tests, the ALTV also planscaptive carry flights and drop tests. The tests will continue through thissummer, but we've not announced any specific dates," Walker told SPACE.com.

NASA'sinvolvement in the X-37 dates back to 1998, when the project was selected asthe first of a planned series of flight demonstrators dubbed Future X. At thetime, NASA agreed to share the X-37's projected $173 million cost with Boeingand the U.S. Air Force. After the Air Force announced in 2001 that it wouldstop funding the project, NASA told Boeing that thecompany would have to submit a new proposal for the X-37 to be eligible foradditional funding.

Afterpersistent prodding from U.S. Rep. Dana Rohrabacher (R-Calif.), NASA in 2002awarded Boeing a $301 million contract for two X-37 vehicles instead of one.One of those vehicles would conduct a series of drop tests within theatmosphere, paving the way for the flight of the orbit and re-entry vehicle in2006.

ButNASA advised Boeing in late 2003 to throttle back on development of the orbitand re-entry vehicle and directed Boeing to stop work on that part of theprogram altogether. X-37 was dealt a further setback last year when a NASAreview concluded that the program was not a good fit with the agency's newspace exploration agenda.

Brian Berger of SpaceNews contributed to this story.