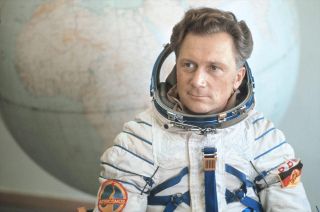 Sigmund Jähn, the first German to fly in space, has died at the age of 82.

"With Sigmund Jähn, the DLR has lost a globally-recognized cosmonaut, scientist and engineer," said Pascale Ehrenfreund, chair of the DLR executive board, in a statement posted to the aerospace center's website on Sunday. 'The first German in space always saw himself as a bridge-builder between the East and West and for a peaceful use of space."

One of just four candidates selected in November 1976 by Germany (then East Germany or formally, the German Democratic Republic) for the former Soviet Union's Interkosmos program, Jähn made one flight into space, logging 7 days, 20 hours and 49 minutes off of Earth.

Launched on Aug. 26, 1978 as a research cosmonaut, Jähn and his Soyuz 31 crewmate, Soviet cosmonaut Valery Bykovsky, flew supplies to Russia's Salyut 6 space station. The two joined the station's two-person resident crew, Vladimir Kovalyonok and Aleksandr Ivanchenkov, to conduct experiments that spanned the fields of remote sensing to medicine and biology, as well as materials science and geophysics.

During his week on orbit, Jähn also filmed a small toy figure from an East German children's television show (Sandmännchen) and addressed his fellow countrymen during a live broadcast.

"I am very happy for the chance to be the first German to take part in this manned spaceflight," he said.

Leaving behind their Soyuz 31 spacecraft docked to Salyut 6, Jähn and Bykovsky returned to Earth aboard Soyuz 29 on Sept. 3, 1978, touching down on the steppe of Kazakhstan after orbiting the planet 124 times.

Sigmund Werner Paul Jähn was born in Morgenröthe-Rautenkranz, a small village in the Vogtland district of Saxony, Germany, on Feb. 13, 1937. Trained as a book printer and then serving as a youth leader, Jähn joined the East German air force (Luftstreitkräfte der Nationalen Volksarmee or LSK) in 1955.

A pilot in an LSK fighter squadron from 1958, Jähn was serving as the head of air tactics and aerial combat when he was assigned to study at the Yuri Gagarin Air Force Academy at Monino near Moscow in 1966. He graduated in 1970 and was working for the LSK on pilot education and flight safety when he was selected for the Interkosmos program.

Reporting to Star City, outside of Moscow, on Dec. 4, 1976, Jähn and his future backup, Eberhard Köllner, began six months of basic cosmonaut training, followed by another year of mission-specific preparation.

After his spaceflight, Jähn returned to Germany, where he led a newly-created space training center for the East German air force. Following the fall of the Berlin Wall and the reunification of Germany, he consulted for the DLR and European Space Agency (ESA) at the Yuri Gagarin Cosmonaut Training Center in Star City.

Although he did not fly again, Jähn helped prepare five other Germans for their missions to the space station Mir, including Klaus-Dietrich Flade, Reinhold Ewald, Ulf Merbold, Thomas Reiter and Hans Schlegel.

"The news of Sigmund Jähn's death has touched me deeply," wrote Jan Wörner, ESA's Director General, in a post on Twitter on Sunday. "Whenever we met, it was very personal, a friendship was created that was not only about space travel and his tireless support of European astronauts."

Jähn retired in 2002, but remained active in promoting spaceflight in Germany and around the world. A founding member and former executive committee member of the Association of Space Explorers, Jähn made frequent public appearances, including in his hometown, where a museum exhibit celebrates his Soyuz 31 flight.

For his service, Jähn was recognized as a Hero of the Soviet Union and Hero of the German Democratic Republic, and was bestowed the Order of Karl Marx and Order of Lenin. In 2001, Asteroid 17737 was named "Sigmundjähn" in his honor.

Jähn was married to Erika Hänsel, and together they had two daughters, Marina and Grit.